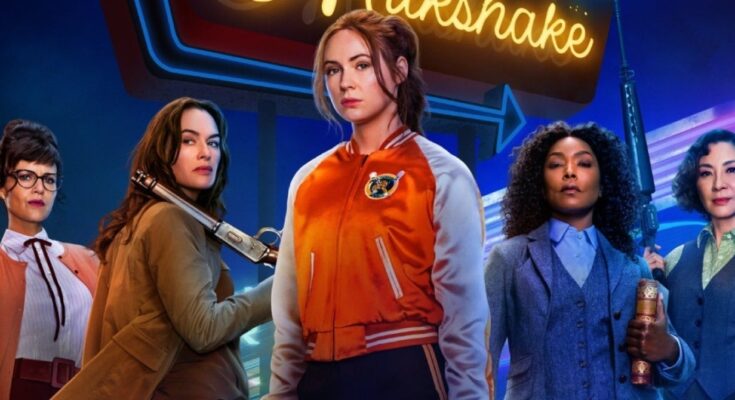 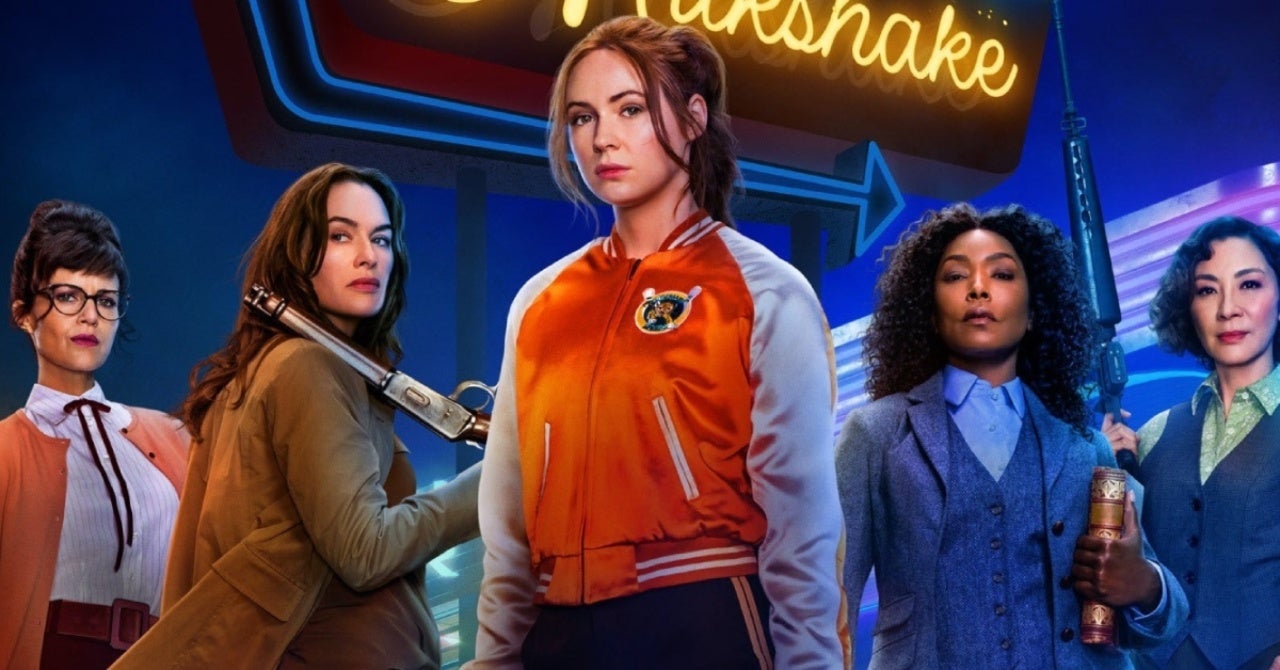 Being a woman in this world is — and has been — incredibly challenging. That truth has been reflected across popular culture to various degrees of success, but has particularly begun to drive the world of action movies, from off-the-wall cult classics like Kill Bill and Tank Girl to newer blockbusters like Black Widow and Birds of Prey (and the Fantabulous Emancipation of One Harley Quinn). Existing somewhere in the dichotomy between those movies is Gunpowder Milkshake, an original female-led action-adventure that arrives on Netflix later this week. The film’s all-star ensemble cast and unique approach to aesthetics have already captivated film fans prior to the film’s release — and yet, the final film manages to both fulfill and subvert whatever expectations they might be having. Gunpowder Milkshake isn’t quite the movie that audiences might be expecting — it’s something even weirder, more beautiful, and more memorable.

Gunpowder Milkshake centers around Sam (Karen Gillan), an efficient, trained assassin who was raised by a shadowy organization dubbed “The Firm” after being abandoned as a child by her mother, a fellow assassin named Scarlet (Lena Headey). After a chaotic chain of events causes Sam to cross paths with a young girl named Emily (Chloe Coleman), Sam’s allegiance to The Firm — and the pair’s safety — are put to the test. In a last-ditch effort, Sam is forced to reconcile with Scarlet and her associates, a trio of assassins dubbed The Librarians (Michelle Yeoh, Angela Bassett, and Carla Gugino).

The concept of Gunpowder Milkshake intrigued me from the second information on it was first reported, as the idea of a multi-generational, female-led action film still feels oddly revolutionary. And, by and large, Gunpowder Milkshake takes the significance of that concept and runs with it, using its violent allegory to tell a tale of all of the ways women can be let down by the patriarchy. Gillan’s Sam serves as a fascinating audience proxy for that whole ordeal, showcasing what happens when a woman is hardened by the world around her, and sending her not only on a discovery of identity, but of her place in the generations of women who have gone through a similar fate. This is especially the case once Emily enters the picture, as it becomes genuinely cathartic watching Gillan and the other women in her orbit fight to preserve the young girl’s choices and future from a cycle of violence. (All in all, it would make for a compelling double feature with the recently released Black Widow, which also tackles a similar concept within the confines of the Marvel Cinematic Universe.) That being said, an argument could definitely be made for having explored that concept even further, as the more intersectional aspects of feminism such as race and sexuality are just barely touched on.

But the narrative that Gunpowder Milkshake lays out — and the stylish, but careful way that director Navot Papushado chooses to do so — keep the film feeling like such unabashed fun that those flaws can be overlooked in the moment. With its colorful aesthetic and violent storyline, it would’ve been safe to assume that Gunpowder Milkshake would unfold as a high-octane, non-stop spectacle — and for stretches of the film, it definitely does. But one of the most unexpected qualities of the film is definitely its pacing, which isn’t afraid to linger on or draw out certain sequences for the sake of characterization and overall vibe.

There still is a definite sense of urgency as Sam and her associates get towards the explosive third act, but the quieter moments or casual longer shots speak volumes to the capabilities of the film’s characters, and make the proceedings feel just the right amount of hectic. In turn, those dips in tone only make the more intense, action-packed moments really shine — whether it’s Gillan standing off against goons in a neon-lit bowling alley, Gugino firing a turret gun while Janis Joplin croons in the background, or a certain mid-movie fight sequence that is too inventive and too specific for me to even want to spoil here. There’s an overwhelming sense of creativity and care to so many elements of the film, and by the time the film’s ensemble of female characters are able to truly kick ass, it only makes those moments more rewarding.

One of the biggest selling points of Gunpowder Milkshake has been its star-studded ensemble cast — and, thankfully, the film really lets them all shine in genuinely fun ways. Amid the film’s weird world, Gillan’s Sam strikes a much-needed balance — somewhere between the world-weary badass with a heart of gold of the MCU’s Nebula, and the adventurous woman discovering herself of Doctor Who’s Amy Pond. (It’s also worth praising The Witcher star Freya Allen, who is brilliantly cast as a younger version of Sam for a few key sequences.) Headey’s take on Scarlet helps further ground the film in some of its most surreal moments, as does Coleman’s spunky, wise-beyond-her-years take on Emily. Bassett, Gugino, and Yeoh shine every single second they’re on screen (both together and separately), and each character has key sequences that are sure to break segments of film Twitter. Paul Giamatti also delightfully chews the scenery as Nathan, a leader of The Firm who gleefully slips between being an ally and adversary.

The technical aspects of Gunpowder Milkshake help the film become absolutely delectable, creating a sense of ambiance that is essential in selling some of the bigger and more brutal sequences. The cinematography is a candy-colored dream, and the costumes are impeccable to match, with items of clothing that I can already see being cosplayed at future conventions. The music bobs in and out of original score and existing music with an excellent flair, with one Janis Joplin needle drop that’s been stuck in my head for most of the time I’ve been writing this review.

When Gunpowder Milkshake gets released on Netflix later this week, it is going to undeniably (and deservedly) draw comparisons to Birds of Prey, thanks to the neon aesthetics, the sweeping hand-to-hand combat sequences, and the story that involves a ragtag group of women protecting a young girl. But as Gunpowder Milkshake marches on, it proves that we’ve only scratched the surface of how to tell that kind of female-fronted story — and just how many different ways it can still be a novel concept. Gunpowder Milkshake is an undeniably quirky, stylish, and creatively made epic, one that lets its ensemble cast and its core message shine. To be honest, it’s the first original Netflix film that I’ve immediately wanted to see get multiple sequels, a prequel, and an animated spinoff, and, hopefully, it’ll get the chance to explore all of those options.

Gunpowder Milkshake is set to be released on Netflix on July 14th.