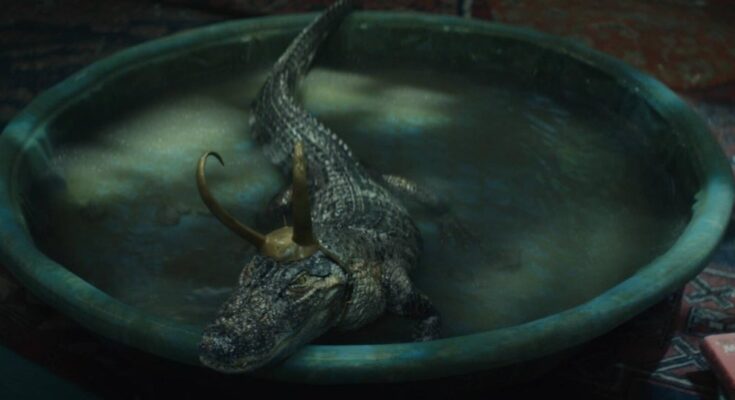 The penultimate episode of Loki, “Journey Into Mystery,” was released on Disney+ this week and it has Marvel fans talking about everything from Richard E. Grant’s performance as Classic Loki to the super sweet hug between Loki (Tom Hiddleston) and Mobius (Owen Wilson). However, the real standout of the episode was Alligator Loki, who fans can’t stop talking about on Twitter. In fact, @keiidakamya took to the social media site this week to share her own Alligator Loki fan-comic, which has since gone viral.

“No but I want Croki backstory #Loki,” @keiidakamya wrote. Many folks have been calling Alligator Loki “Croki,” which is an adorable name despite the fact that’s he’s been confirmed to be an alligator, not a crocodile. You can check out the comic, which features Alligator Loki having a tough conversation with Odin, below:

Recently, Loki‘s head writer, Michael Waldron, spoke with Marvel.com and revealed Alligator Loki is not a character from the comics (unlike Frog Thor), which is one of the reasons people are loving @keiidakamya‘s art.

“We were talking about [how] we want to meet many different versions of Loki in this show,” Waldron explained. “I was just like, there should be an Alligator Loki. And it’s like, well, why? Because he’s green.” He added, “It’s so stupid, but it also makes total sense … You almost have to take it seriously, like maybe he is [a Loki]? Why shouldn’t there be an alligator version of Loki? For all we know, that’s an alligator universe or whatever. It’s just the sort of irreverent thing that, in this show, we play straight and make the audience take it seriously.”

The finale of Loki will drop on Disney+ on Wednesday, July 14th. The rest of Marvel’s 2021 line-up includes Black Widow, which is now scheduled to hit in theatres and Disney+ Premier Access on July 9th, What If… is premiering on Disney+ on August 11th, Shang-Chi and the Legend of the Ten Rings in theatres on September 3rd, Eternals in theatres on November 5th, Hawkeye and Ms. Marvel to Disney+ later in the year, and Marvel’s Spider-Man: No Way Home in theatres on December 17th.