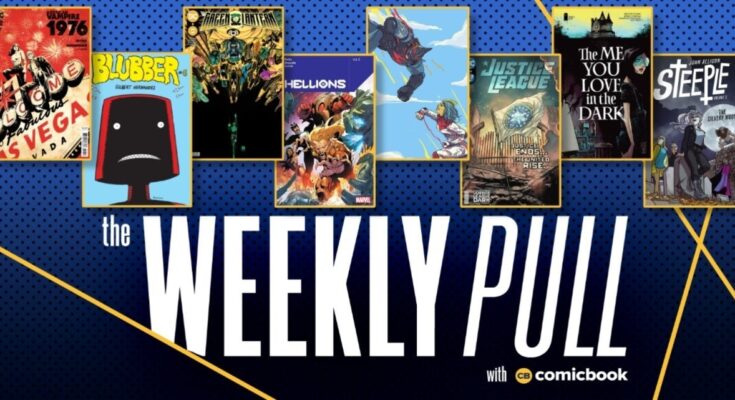 It’s almost another new comic book day, which means new releases hitting stores and digital platforms. Each week in The Weekly Pull, the ComicBook.com team highlights the new releases that have us the most excited about another week of comics. Whether those releases are from the most prominent publisher or a small press, brand new issues of ongoing series, original graphic novels, or collected editions of older material, whether it involves capes and cowls or comes from any other genre, if it has us excited about comic books this week, then we’re going to tell you about it in The Weekly Pull.

This week, a buzzworthy new horror series from Cullen Bunn makes its debut, and the sagas of American Vampire and Jenny Zero come to a close. Plus, key issues for books like Green Lantern and Justice League, and new collections of some fan-favorite titles.

What comics are you most excited about this week? Let us know which new releases you’re looking forward to reading in the comments, and feel free to leave some of your suggestions as well. Check back tomorrow for our weekly reviews and again next week for a new installment of The Weekly Pull.

A decade after American Vampire, the end of the saga is here with American Vampire 1976 #10. As someone who has followed the story from the very beginning, there’s something satisfying about getting a true ending to a story and that’s what we get here. 51 years to the day that Skinner Sweet brought Pearl Jones into eternal life, the pair are together on America’s bicentennial to showdown against the Beat for the fate fo all humankind. Action filled but also meaningful, it promises to be a great send off and while yeah, you probably need to at least be familiar with the series, this is definitely one to check out. — Nicole Drum

It has been more than a year since the release of Blubber #5. That has not required ever-heightening anticipation due to a cliffhanger or long-awaited character beat; Blubber isn’t that sort of comic book. The release of Blubber #6 is exciting because no one can predict what Gilbert Hernandez will have filled its pages with. Each issue is stuffed with a collection of bizarre anecdotes which sometimes collide. They are filled with outrageous, monstrous forms engaged in absurd pursuits of sex and violence. Hernandez’s sense of cartooning is unparalleled as he fuses inhuman forms with passion and vigor before they prove to readers that anything can occur on a page of comics. While Blubber isn’t recommended for reading on a public commute, it is perfectly suited to a backyard in summer as readers are reminded what a delightfully strange place the mindscape of Gilbert Hernandez remains. — Chase Magnett

Things have been rough for the Green Lanterns lately, and sadly they aren’t going to get any easier. In fact, they might just get a little worse before the sun rises once more, but despite those hurdles what is readily apparent in Geoffrey Thorne’s run is how resilient the Corps continues to be, and you can’t help but root for them. Longtime Lantern fans are going to find a lot to love here, especially if you happen to be a fan of a certain Sinestro Corps, and the thrilling rollercoaster ride doesn’t seem to be ending anytime soon. — Matthew Aguilar

I’ll admit, I was definitely confused when Hellions was first announced as part of Marvel’s X-Men line — but I could not be happier that the title proved me wrong. The series follows the most eclectic array of villains, including Psylocke, Havok, Orphan-Maker, and Nanny, going on various missions on a quest for retribution in the mutant island of Krakoa. With Hellions, Marvel has finally found its true answer for the violent and lovable villains seen in DC’s Suicide Squad, and Zeb Wells’ script balances that unabashed absurdity with a staggering ease, as does the madcap art by Stephen Segovia. I read the entirety of the first volume of Hellions in one single, glorious sitting, and I can’t wait to do the same with this edition. — Jenna Anderson

If anything, the only qualm I’ve had with Jenny Zero is that I wish it was a proper ongoing, as I would read the exploits of its kaiju-fighting, hard-partying monster woman for as long as possible. But with this week’s conclusion (for now), Jenny’s quest for identity and mastering her powers is sure to come to a violent head, and I could not be more excited to see what that entails. Dave Dwonch and Brockton McKinney have crafted a narrative that balances humor, heart, and legacy in some fun and unconventional ways, and the art by Magenta King and color work by Dam are an offbeat sight to behold. If you haven’t been reading Jenny Zero yet, take this is as a sign that you need to start doing so. — Jenna Anderson

The War against Synmar has pushed the Justice League to its limits, even destroying the Hall of Justice in process, but don’t count out the League just yet. Half the fun of this book is just seeing how the League manages to overcome such overwhelming odds, and Justice League Dark offers the perfect contrast, delving into the wonderfully odd world of magic in an adventure that continues to surprise. It’s quite the one-two punch, and makes for an easy recommend. — Matthew Aguilar

The Me You Love in the Dark #1

I love a good horror comic, particularly those that rely on more intimate and relatable fear and terror and The Me You Love in the Dark, a new title by Skottie Young and Jorge Corona promises to be just that. The story follows an artist, Ro, who moves into house in the midwest trying to find fresh inspiration as she’s hit a bit of a stall. The house, she’s told, is haunted and she soon discovers this to be true. The story promises to be one both of dark exploration. What will Ro find in the darkness and, in turn, what will the darkness find in Ro? The book is described as a story of love and terror and discovery and it is the perfect tale to start a transition from summer into fall. — Nicole Drum

Those still missing Giant Days would be well advised to check out John Allison’s newest comics series at Dark Horse Comics: Steeple. This new thriller retains Allison’s keen eye for character work, dialogue, and humor, but places all of them in a very different setting as pastors and pagans alike battle dark forces threatening a small Cornish town. The first volume was released in single issues and the series has transitioned to an OGN format for future stories beginning with The Silvery Moon. The second Steeple tale promises the introduction of werewolves or something even stranger as both Christian and occult parishioners in town continue to take sides. Allison has already proven he can deliver twists and thrills in the first volume of Steeple without losing a single step in maintaining the laughs and charm. That’s why any fan of Giant Days is bound to enjoy settling in with this supernatural thriller after graduation. — Chase Magnett