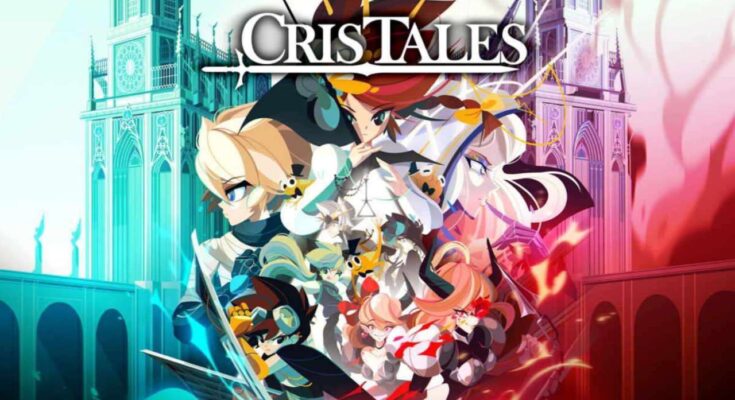 In today’s gaming landscape, there’s no shortage of love letters to classic console RPGs. From indie titles to triple-A projects like Bravely Default II, games of all sizes try to recapture the magic of sitting down in front of a CRT screen with a SNES controller to embark on an epic adventure. While these efforts have seen varying degrees of success, few have offered as much in the way of distinct aesthetics, clever ideas, and a new point of view as Modus Games’ Cris Tales. Developed by Dreams Uncorporated and SYCK, Cris Tales hits that sweet spot where the familiar meets the fresh and is a game held back only by its technical limitations.

In Cris Tales, players begin the game as Crisbell, an orphan who soon awakens to previously unknown power when the Empress of Time’s army unexpectedly attacks her city. It turns out that Crisbell is a time mage of great potential, which could be the key to stopping the Empress’s conquest. Thus, she leaves home to embark on a pilgrimage to four cathedrals that will help unlock her full power.

Cris Tales‘ larger plot is familiar. The world’s Tolkien-esque history sees civilization only barely recovering from the Empress’s first attempt at conquest when she reappears and makes her second push. And, like an early Final Fantasy game, Crisbell’s journey takes her to four cities that are each thematically linked to one of the four classical elements.

But despite these familiar plot beats, the world feels unique. Dreams Uncorporated is based in Colombia and draws on the country’s culture and architecture in building Cris Tales‘ environment, eschewing the typical default to a Euro-medieval setting. Those environments are cel-shaded and often appear like two-dimensional objects in a three-dimensional world, giving the game the style of a pop-up storybook.

The game’s storytelling shines in the smaller city stories. They touch on environmental and class themes, ultimately putting their fate in Crisbell and thus the player’s hands. After deposing the greedy mayor of one city, will you suggest that the idealistic working-class activist fill in the leadership vacuum or the more politically savvy socialite? It isn’t going to match Disco Elysium for political depth, but its lighter touch in dealing with such unfortunately relevant themes has its charm.

These choices can affect which of the game’s endings players see, but the results are more immediately visible thanks to the way Crisbell views time. She can see the past, present, and future side by side, represented in towns by the screen dividing into three triangular sections showing past, present, and future. With this fourth-dimensional sight, Crisbell and players can see the ramifications of their choices in real-time and even send the magical frog Matias through time to acquire certain items or information.

While the use of time as a mechanic is clever (as long as you ignore the inherent paradoxes), there’s also something magical about being able to see the game’s cities and NPCs through this fractured lens. It presents characters in their idealistic youth, their determined present, and their future fate — Happy? Lonely? Dead? — simultaneously, like seeing someone’s entire life’s story play out before your eyes with visual lyricism. In several cases, these glimpses become poignant and affecting microstories in and of themselves.

Crisbell’s powers are also vital to the game’s battle system. Players can have Crisbell alter her enemies’ timelines, reverting them to past versions of themselves or progressing them into future forms. While this typically makes enemies weaker and more threatening respectively, some enemies have atypical reactions. The time-shifting mechanic creates synergies with other characters’ powers. For example, a player can apply damage-over-time effects like poison or burn and then shift the enemy into the future to have them take all of that potential damage at once. These tactics are vital to survival in the early game and create some brutal boss battles. However, it’s disappointing that the time-shifting becomes less necessary as the game progresses and the characters’ raw power grows.

It’s also disappointing that the game doesn’t push this mechanic as far as it could go. While Crisbell can cast spells that speed up characters’ turns in combat, it seems like a missed opportunity not to allow her to shift party members back and forth through time. Similarly, her time-travel vision and other capabilities seem built for solving mind-bending puzzles, but those never materialized. However, the mechanics here are strong enough to leave players hoping for a sequel to expand their usages.

A JRPG can live or die by its score, and composer Tyson Wernli provides a brilliant soundtrack. Wernli’s exploration pieces are enchanting, deploying tenderly plucked guitars, soft percussions, and broad horns that set it apart from many more classically-minded JRPGs. Taking a page from Nobuo Uematsu’s Final Fantasy playbook, Wernli switches to hard rock to get the blood pumping in combat.

While the core of Cris Tales is stellar, it is rough around the edges. The voice acting ranges from adequate to unconvincing, and it has some severe technical flaws. Playing on the Nintendo Switch, the load times going into and out of scenes — particularly the random battles — are far too long. Eventually, players may adjust to it, but early on, it hampers any attempt to become immersed in the game’s world.

I also encountered instances where an NPC seemed to reference previous conversations that I had not had. The game also crashed on multiple occasions, but the most frustrating moment came after a particularly tough boss battle that took numerous attempts to win. After finally achieving victory, I spent 30 minutes searching for what I was supposed to do next before realizing that the game had failed to load the next quest objective (and, somewhat randomly, had stripped one of my characters of 14 levels of experience). I was lucky that I hadn’t saved over my previous data after winning the boss fight, or I would have lost hours of gameplay. I can’t speak to whether these issues plague the game’s PC or other console versions, but they did frustrate my personal experience.

I’m hoping that Modus will continue to support the Cris Tales with patches to address some of its technical issues. Decreasing load times might be too much to hope for on Switch, but game-breaking bugs are another story. I feel optimistic about it because Cris Tales is too good of a game to leave things like this. It puts new spins on some classic JRPG elements and creates an aesthetic all its own, telling tales that are universal and troublingly timely. Technical flaws aside, Cris Tales is a potent blend of the best of the JRPGs that inspired it and fresh ideas from a unique and personal perspective. Playing it is like discovering a fantastic SNES RPG from another timeline (with much more advanced graphics), serving as both a love letter to the past and an invitation to push forward, and it is likely to capture the imaginations of anyone who embarks on Crisbell’s journey.