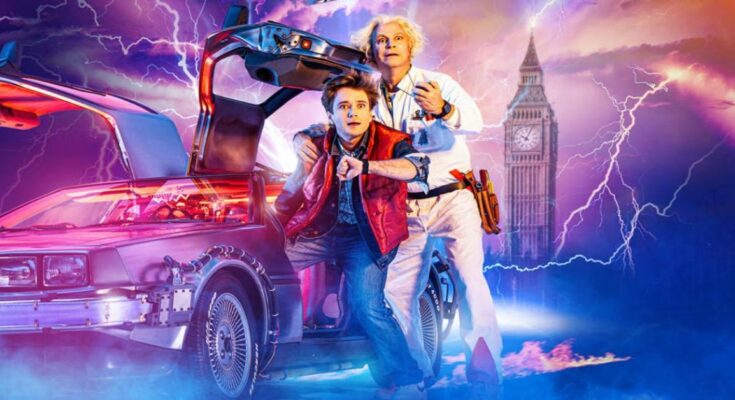 The opening night of London’s Back to the Future: The Musical will go on without Doc Brown actor Roger Bart, who tested positive for COVID-19. Deadline confirms understudy Mark Oxtoby will make his debut in the West End production, an adaptation of the classic 1985 comedy co-created by Robert Zemeckis and Bob Gale. The film stars Michael J. Fox as Marty McFly opposite Christopher Lloyd as the eccentric, time-traveling inventor and scientist Doctor Emmett Brown. Olly Dobson headlines as the out-of-time teen in Back to the Future: The Musical, set to run through April 2022.

The musical features new music from original Back to the Future trilogy composer Alan Silvestri with lyrics by Glen Ballard (Zemeckis’ The Polar Express, Ghost the Musical). Watch the trailer for the stage show above.

“How does one fill the shoes of the iconic and amazing Christopher Lloyd in this beloved role? The simple answer is, you can’t,” Bart told London Theatre about stepping into Lloyd’s most famous role. “But what a crazy dream true to give it my best shot.”

Gale, co-writer and producer of the Back to the Future trilogy, called Bart “a wonderful talented veteran of musical theatre and a comedian in his own right.”

“He took some of the aspects of Doc Brown from the movie, but he really added another dimension Doc that we don’t really get to see,” Gale said, “because the relationship between Marty and Doc in the musical is a lot warmer.”

The biggest difference is that this Doc Brown sings — and dances.

“The songs in the show are a lot like long close-ups in a film. It gives the audience and the actors the opportunity to really reveal many things you may not see otherwise,” said Bart, who is expected to return to the stage at a later date.

The official description of Back to the Future: The Musical and ticketing information is available below:

Welcome to Hill Valley! Take an electrifying ride back in time as the 1985 blockbuster film and pop culture phenomenon arrives in London’s West End as a groundbreaking new musical adventure!

When Marty McFly finds himself transported back to 1955 in a time machine built by the eccentric scientist Doc Brown, he accidentally changes the course of history. Now he’s in a race against time to fix the present, escape the past and send himself… back to the future.

Adapting this iconic story for the stage are the movie’s creators Bob Gale (Back to the Future trilogy) and Robert Zemeckis (Forrest Gump). The production features original music by multi-Grammy winners Alan Silvestri (Avengers: Endgame) and Glen Ballard (Michael Jackson’s Man in the Mirror), alongside hit songs from the movie including The Power of Love, Johnny B. Goode, Earth Angel and Back in Time.

Strap yourself in for a thrilling theatrical experience this August!

When BACK TO THE FUTURE: THE MUSICAL hits 88mph, you’re gonna see some serious… entertainment.