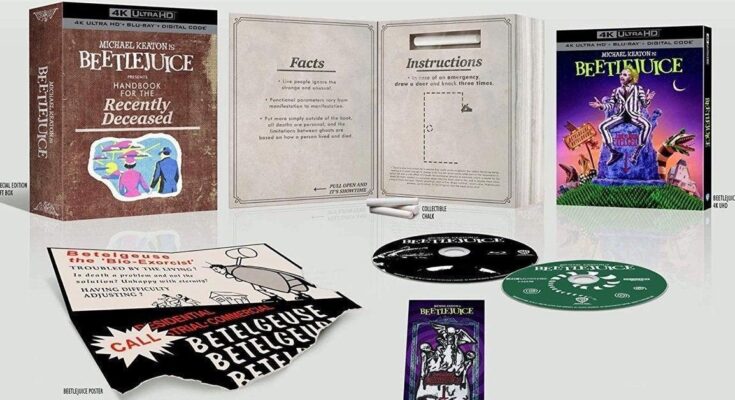 Tim Burton’s beloved 1988 film Beetlejuice hit 4K Ultra HD last year in multiple flavors that included a collector’s edition giftset with The Handbook for the Recently Deceased, a Beetlejuice poster, a glow in the dark embroidered patch, and special edition packaging. That edition just happens to be only $27.99 right now here on Amazon, which is a whopping 44% off list and an all-time low price by a mile. Odds are this price won’t last long, so jump on it while you can.

The standard edition of Beetlejuice in 4K UHD is available to order here on Amazon for $23.99. Best Buy’s exclusive SteelBook edition was available here for $29.99, but is currently sold out. While you’re in Beetlejuice mode, you might want to check out these amazing Beetlejuice sneakers. Odds are they’ll be completely sold out again before Halloween. The full list of contents for the Beetlejuice 4K Collector’s set can be found below.

The official synopsis for Beetlejuice reads:

“After Barbara (Geena Davis) and Adam Maitland (Alec Baldwin) die in a car accident, they find themselves stuck haunting their country residence, unable to leave the house. When the unbearable Deetzes (Catherine O’Hara, Jeffrey Jones) and teen daughter Lydia (Winona Ryder) buy the home, the Maitlands attempt to scare them away without success. Their efforts attract Beetlejuice (Michael Keaton), a rambunctious spirit whose “help” quickly becomes dangerous for the Maitlands and innocent Lydia.”