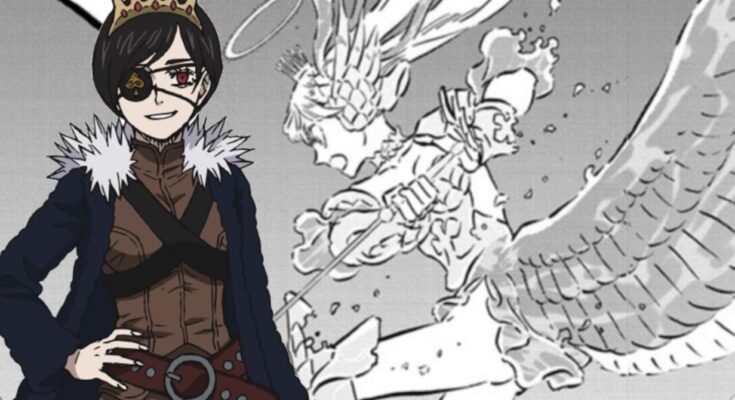 Black Clover revealed the winner of Noelle Silva and Vanica Zogratis’ rematch with the newest chapter of the series…at least for now. The second phase of the fights against the Dark Triad continues in the Spade Kingdom saga, and with Dante Zogratis officially defeated by Magna Swing, the focus of Yuki Tabata’s original manga series has now shifted to the second major fight as Noelle has officially kicked off her fateful rematch against Vanica. The previous chapter seemed to swing things in Noelle’s favor as her new form granted her a huge boost in power.

The previous cliffhanger of the series saw Noelle dealing a critical blow to Vanica, but the fight did indeed continue in the newest chapter as Vanica’s blood magic and devil power kept her fighting. But as the chapter continued, Noelle was indeed crowned the winner. Unfortunately, before she was able to deal the final blow Vanica underwent a major transformation as Megicula officially took over her body completely.

Chapter 297 picks up right after Noelle manages to stab through Vanica with her new sword gained through the Spirit Dive: Saint Valkyrie Armor form. This was quickly revealed not to be enough to take Vanica down completely as it takes a little more of Noelle chasing her down in order to finally deal enough damage. Breaking through all of her blood magic like before, Noelle strikes Vanica in the chin with a powerful kick and follows up with a combo.

This pins Vanica to the ground, and her devil power begins to fade away. Vanica acts strange, however, as even losing this fight to Noelle attracts the villain to her even more. She wants to even be rivals and compete over who will get stronger, but Noelle is not hearing any of that nonsense and prepares to deal the final blow. But before she does, Megicula reveals her true plans for Vanica and begins to reveal her true form.

Wanting to sacrifice both Vanica and the captured Lolopechka, Megicula is now geared up as Noelle’s next major opponent. So while Noelle defeated Vanica in their rematch, the fight is far from over as now she’s gearing up to fight an even stronger threat next. Given the time limit on her divine strength, it’s going to be a challenge. But what did you think of this rematch between Noelle and Vanica? Will she be able to defeat Megicula next? Let us know all of your thoughts about it in the comments! You can even reach out to me directly about all things animated and other cool stuff @Valdezology on Twitter!