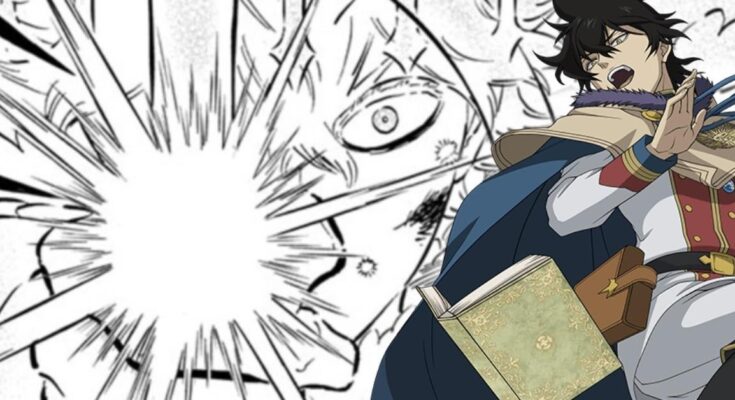 Black Clover showed off the power of Yuno’s newest attack with the newest chapter of Yuki Tabata’s original manga series! The fights against the Dark Triad and the devils of the underworld continue with the newest chapters of the series, and after focusing on the fights against Dante and Vanica, the attention has returned to the fight against the third Zogratis sibling, Zenon. As Yuno and Langris continue to struggle against Zenon, the previous chapter of the series revealed that Yuno had a plan in mind to take on the devil with an attack he had been preparing.

Before the raid against the Spade Kingdom officially began, Yuno and Langris had been training together to focus Yuno’s Saint Stage energies into a new ability that could somehow piece through Zenon’s bone magic defenses and the previous chapter revealed what this actually was. We saw Yuno debut a bow and arrow mix up, the Spirit of Euros, with the cliffhanger in the previous chapter, and the newest chapter gave fans an idea of how strong and effective this new attack really is.

Chapter 306 of the series kicked off right after Yuno started charging his new bow and arrow combo, and sees him letting it loose as soon as the chapter begins. It instantly tears its way through Zenon’s bone magic defenses, and pierces a hole right in his chest. Zenon himself is surprised at the speed and the strength of it being able to tear its way through his magically enhanced chest, but it’s clear that Yuno’s new attack was as indeed as effective as he had initially prepared it to be.

The problem here now is that this is clearly no longer the end of the fight against Zenon. He’s going to be digging his heels further into his devil’s power going forward, and if this is as much as Yuno was able to do even with a new attack, then it’s going to be a struggle to do any damage in the rest of the fight. Yuno might not have any more tricks like this up his sleeve if this was what he had been practicing for. What do you think? Curious to see if Yuno has anything else left in his tank? Let us know all of your thoughts about it in the comments! You can even reach out to me directly about all things animated and other cool stuff @Valdezology on Twitter!