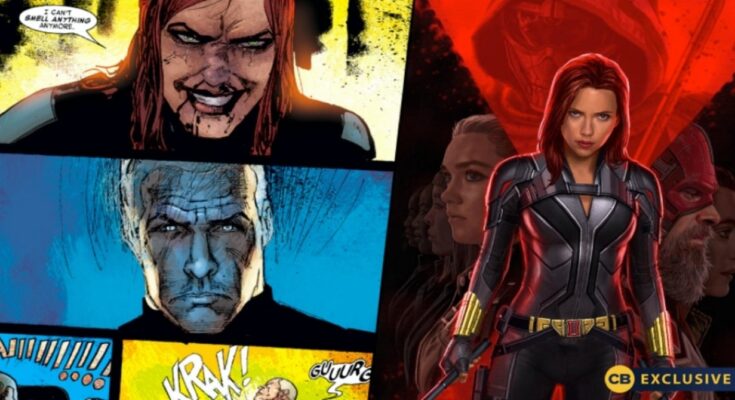 Black Widow writer Eric Pearson talks spoilers about the film’s shadowy villain, Red Room overseer General Dreykov (Ray Winstone), and putting the “pedal to the metal” with a third-act villain from Natasha Romanoff’s (Scarlett Johansson) blood-stained past. Spoilers for Marvel’s Black Widow. When Natasha and ex-widows Yelena Belova (Florence Pugh) and Melina Vostokoff (Rachel Weisz) infiltrate Dreykov’s floating fortress to destroy the program that turned them and countless other girls into killers, the Russian villain reveals invisible “armor”: weaponized pheromones. This prevents Dreykov’s brainwashed widows from harming him — so the super spy-turned-Avenger breaks her nose, pulling a moment straight from the pages of Marvel Comics.

“I talked a lot with [director] Cate Shortland and Scarlett and Kevin [Feige, producer] and Brian [Chapek, co-producer] about what our intentions were with themes and all that. And Cate and Scarlett especially wanted this to be a clear message against misogyny, against oppression, against controlling women’s bodies,” Pearson told ComicBook‘s Phase Zero podcast. “But also by just sheer logistics, the script, or the storyline had a bit of a getting the band back together vibe to it. Just by that, and also by the nature that Dreykov is this secret enemy in the shadows, he can’t really be on the field. He has to be hidden so we don’t really get to see him until the third act, besides a few check-ins.”

The little-seen villain only steps out of the shadows in the film’s explosive climax, where Natasha confronts Dreykov about decades of string-pulling. “I own this world,” Dreykov tells Natasha, who hits back: “You seem desperate to impress me.”

“Because we had limited time, it was like, ‘All right, we got to go pedal to the metal with this guy.’ He’s a piece of sh-t right out the gate. Yeah, he’s a coward cowardly man who has accumulated a lot of superficial power but is basically isolated in the dark telling himself what a big man he is,” Pearson said. “One of the harder parts is that we have that classic Natasha Romanoff four-dimensional chess, reverse interrogation going [on].”

Shooting that scene, where a Dreykov overpowering and beating on a seemingly helpless Natasha, was “hard.”

“They’re like, ‘We’re going too rough. We’re hurting her too much. He’s just…’ And I was like, ‘Remember, she’s in control here. Remember, the whole point of this thing is that she’s working him and we have to remember that,'” Pearson said. “It was just hard to watch. It was hard to just remember, ‘Okay. Yeah, yeah, Natasha’s in control. It’s her plan. She can take the punch. She can break her nose.'”

The exchange, inspired by the 2004 Marvel Knights series Black Widow, was “really the ultimate comic book moment that I wanted,” Pearson said. “It’s not Dreykov in the comics, but a different guy has the pheromone lock on her. And I remembered it from 10 years ago that there’s just a frame of her looking up with the blood in her teeth after having broken her nose, ‘I can’t smell you anymore.’ That was one of my hills to die on.”

“I was like, ‘We got to get this in. She’s never looked cooler in the comics,'” added Pearson. “It also felt like one of those great, professional wrestling ‘fight’s turning’ moments like, ‘Oh my God, Hulk Hogan’s hulking up again,’ or ‘Wait, they were playing possum all along.'”

Dreykov leaves Natasha to die at the hands of his brainwashed widows, but he doesn’t escape a vengeful Yelena: the big bad is blown to bits when she sabotages his plane.

“Hopefully, the audience is very uncomfortable with how terrible this guy has been and you’ve gotten a sense of like, ‘Jesus, this guy has got to go’ and then you want the ‘Charge! Get him!'” Pearson said. “That’s the turn we really wanted there.”