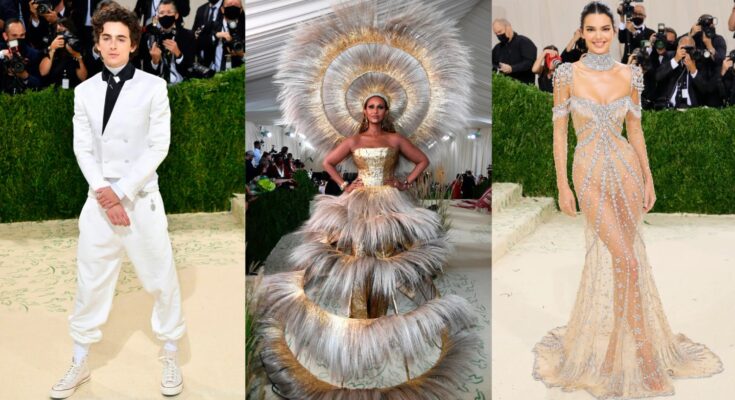 It is Met Gala and nobody can expect less from it. The show is an honor to those who pumps the creativity drink in the industry. Every year, Met Gala has its own theme. This time it is a tribute to the American Style. It was not compulsory for all the guests to wear something goofy or fanatic, but whatever they wear it should have showcase the America’s gusty spirit. Moreover, the theme in itself was creative. There was complete allowance toto guest that made this year’s Met Gala to be one of the most exciting one.

Many of the guest were also showing their gratitude to national icons. All the eyes were stolen by Billie Eilish who wore Oscar de la Renta gown. Lil’ Nas X surprised everyone by carrying off layers of orante Versace that was later stripped to showcase his sparkling cat suit.

Well, scroll below to see some of the very fanatic dress of Met Gala 2021.

Chalamet was wearing all white Haider Acjermann. The collar of his outfit was black and he completed the look by wearing white shoes.

Lil carried Versace so gracefully that one could not took eyes away from him.

Ah! the Jenners are making an entry and it is not smoky? Not possible. Kendall Jenner carried an almost see through Givenchy and she was look amazingly stunning. See through outfits has been one of the most common outfit in many big functions.

She was in Harris Reed which was so stunning that everyone dropped their hearts on her feet along with their jaws.

Kim being Kim, wore a dress that glued everyone’s eyes on her. She was wearing Balenciaga.