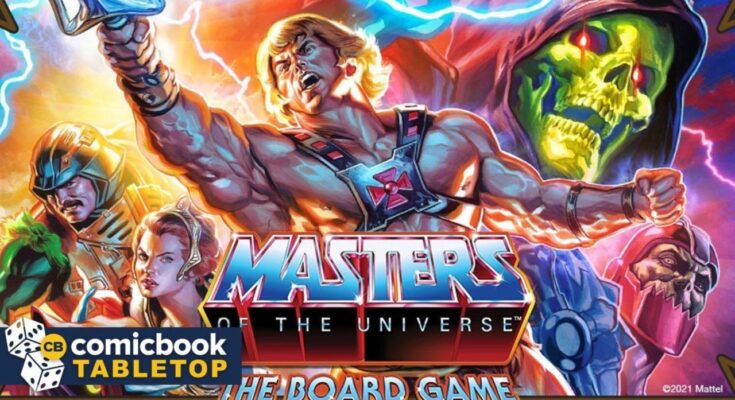 Masters of the Universe is experiencing quite the new lease on life these days, and one of the more anticipated spinoffs from the franchise is CMON’s upcoming board game Masters of the Universe: Clash for Eternia. The game will be hitting Kickstarter soon, and while we’ve received several previews of the miniatures and the gameplay, we didn’t know when the game was actually launching its Kickstarter campaign. That all changed during today’s Livestream, which not only revealed more looks at the game’s impressive miniatures and components, but also the Kickstarter date, which was revealed to be September 14th.

During the Livestream, we also saw the stunning Castle Grayskull, which will be incorporated into some of the game’s scenarios. It sits upon large tiles and when you see the He-Man miniature standing in front of it, the size is quite impressive. CMON also recently revealed our first look at Teela’s miniature, and she looks fantastic as well. You can check out her miniature in the post below.

Masters of the Universe™: Clash for Eternia is coming to Kickstarter in September! Sign up to be notified: https://t.co/YlmWlJkMnM pic.twitter.com/TEklDjxjxo

In Clash for Eternia you’ll choose a side to play as (either He-Man and his allies or Skeletor’s army) and whichever side the other players don’t choose will be played by a single player, known as the controller. During the game, you’ll use the Power System to utilize your character’s unique skills and abilities, and you can also use it to boost their standard actions to higher effect. While you will have access to your character’s unique skills, you won’t utilize all of them in every game. As you level up during the game you’ll decide how you want to progress and evolve your own playstyle for that particular scenario, opening up a level of replayability even for those who always choose the same character.

There’s also the Strategy Deck, which holds cards that act as secret abilities for the Controller, and allow them to spend Power and either rboost their characters or hinder yours. These are extremely limited though, and players will be able to see the Controller building up specific skills in order to use these, so if you’re paying attention you can see them coming.

As with all CMON Kickstarters, there will likely be expansions and even more unlockable stretch goals to make the game even better, and you can get all of the details when the game launches on September 14th.

You can check out all of the character previews released so far right here, and you can head to the campaign page to follow the Kickstarter.

Are you excited for Masters of the Universe: Clash for Eternia? Let us know in the comments or as always you can talk all things tabletop with me on Twitter @MattAguilarCB!