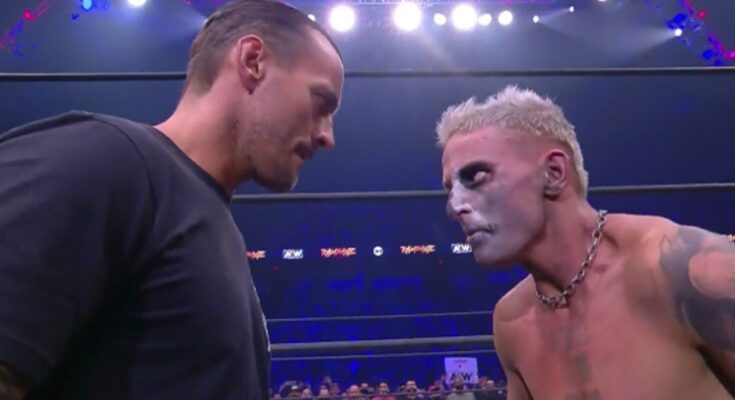 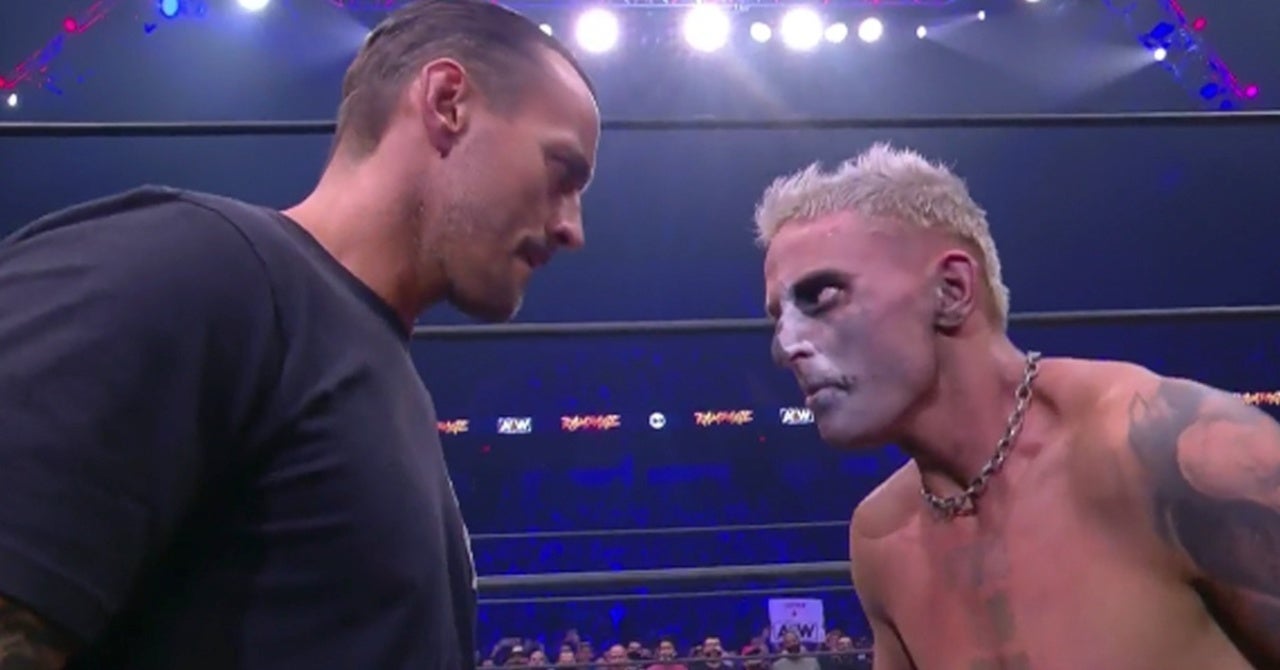 Tonight’s Rampage main event featured AEW’s newest addition and the Best in the World CM Punk, who came out to a huge reaction once again. He even dove into the crowd again before making his way to the ring. Punk would sit in on commentary to watch his All Out opponent Darby Allin (accompanied by Sting) take on Daniel Garcia and 2.0, and they locked up immediately after the bell. They exchanged slaps and chops and then Allin grounded Garcia, and Punk said compared Darby to Sting in the fact that he’s the lifeblood of the promotion like Sting was in WCW.

Allin then charged at Garcia but Garcia dodged it and that sent Allin headfirst into the barricade and hitting the table on his way there, and then Garcia capitalized by throwing Allin into the steel steps. Meanwhile, Sting slammed 2.0 into the barricades and kept them busy.

Garcia threw Allin into the ring as Punk talked about how he’s been preparing and the nerves ahead of All Out. Garcia tried to lift Allin but he reversed it, and then Allin tried to lock in a double wrist lock but almost got in the Fujiwara Armbar. He escaped, but Allin then slammed Garcia’s arm and hand into the steel steps and then shoved his arm between the steps and the post and stepped on it, keep it pinned.

Once back in the ring Garcia hit a big kick to Allin’s head and went for the Romero Special, locking in Allin and pulling his chain around his mouth. Allin then got a piece of Garcia and dragged Garcia’s face over the middle rope, but a trip to the. toprope was cut off by Garcia. Garcia switched arms and hit a SuperPlex off the top rope. He went for the pin but Allin kicked out.

“I think he did it better than I ever did” – @CMPunk

Garcia kept the attack going and kicked Allin in the head, and then dropkicked the back of his head, followed by a pin, but Allin kicked out. Garcia then threw Allin into the barricade and then talked some smack to the crowd. Allin dragged himself up and Garcia threw him back into the ring. Punk and Garcia then started jawing a bit, and Garcia threw Allin into the corner. He hit a punch and then whipped Allin into the other corner, followed by a chop and a slam over his shoulders, but Allin tried to come back with a punch. Garcia kept a hold on Allin’s wrist and hit him with punches, but Allin returned the favor until Garcia forearmed him right across his chest, sending him to the mat hard.

Garcia put Allin into the corner and then into the other corner, but Allin kicked Garcia in the face and then went for an uppercut but Garcia caught him in a rear choke and went to the top rope to get leverage. Allin was able to get free, but the damage was done. Allin hit some elbows but Garcia got the rear choke locked in again. Allin lifted Garcia to the middle rope and hi the Coffin Drop to free himself.

Punk noted Allin’s rear choke game wasn’t so hot, but it was applying it that would give him problems he joked. Garcia and Allin traded chops until Allin changed things up and hit the Pepsi Twist on Garcia. Allin then hit a Code Red on Garcia but Garcia kicked out. Allin was able to deceptively lock in a hold on Garcia and get the win, and then 2.0 hit the ring. Sting handled Garcia but 2.0 was overwhelming Allin, and that’s when Punk got up and headed to the ring. He would face off against 2.0 but before they could clash Allin dove into 2.0 and sent them hard to the floor. Then Allin and Punk stared each other down as Rampage ended.

What did you think of Rampage? Let us know in the comments and as always you can talk all things wrestling with me on Twitter @MattAguilarCB!