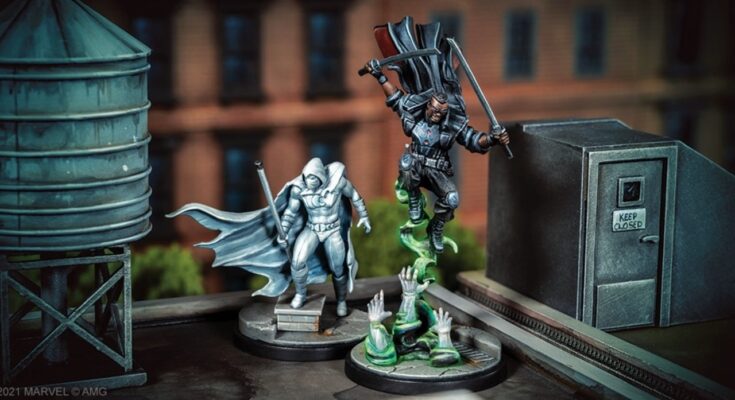 Marvel: Crisis Protocol has revealed the full character cards for Blade, Moon Knight, and Baron Mordo, showing off the miniatures’ unique abilities ahead of their release. Earlier this week, Atomic Mass Games showed off the abilities for three of upcoming Marvel: Crisis Protocol miniatures, all of which build out the game’s more occult elements. Each character has their own abilities, with Blade heavily leaning into the Bleed condition, Mordo having the ability to deal out several dangerous debuffs and conditions to multiple characters at once, and Moon Knight serving as a dangerous wild card. Notably, Blade is also the leader of the Midnight Sons, a new affiliation to Marvel: Crisis Protocol.

Marvel: Crisis Protocol is a miniatures skirmish game in which players control the heroes and villains of the Marvel Universe while competing against another player. Players can use any configuration of heroes and villains, provided their team’s total Threat Level is equal to or lower than the Threat Level of whatever scenario players choose to play through.

As you can see below, Blade is built around the ability to deal out Bleed conditions to his opponents and then gaining multiple abilities from being close to opponents with Bleed. All three of Blade’s core attacks give out the Bleed condition, with the Night of the Dhampir attack having the additional benefit of re-rolling attack rolls when Blade targets an opponent with Bleed. Blade’s Vampiric Immortality also gives Blade extra power and regenerative abilities whenever he ends his activation within a distance of 2 from a character with Bleed. The Vampiric Immortality stacks, so it benefits Blade to be close to multiple characters with Bleed at once.

The Daywalker is coming to #MarvelCrisisProtocol. Check out all of Blade’s abilities today! For more information on Blade, click here: https://t.co/Px9u8zl0yQ#MarvelComics #Miniatures pic.twitter.com/jzAYYCYyDq

Moon Knight is brawler-type of character that can pack a lot of punch with his attacks. The Bo Staff comes with a built-in re-roll, and the Throwing Crescent ranged attack comes with a Rapid Strike ability that allows a player to make two attacks for the cost of one action. Moon Knight’s Multiple Personalities ability gives him one of several benefits chosen at random at the start of his turn, while his Stealth and Wall-Crawler passive abilities gives him extra mobility and the ability to set up for a powerful attack.

The Fist of Khonshu is coming to #MarvelCrisisProtocol. Check out all of his abilities! For more information on Moon Knight, click here: https://t.co/Px9u8zl0yQ #MarvelComics #Miniatures pic.twitter.com/Mp2qh4lsea

Finally, Baron Mordo is built around dealing the Incinerate, Poison, Slow, and Hex conditions to its opponents. The Soul Barb ability deals out one of those conditions to every enemy character close to Mordo, while the powerful Rains of Raggador deals out both Incinerate and Poison to its target. Mordo seems best equipped to maim and hinder opponents from a distance, with Soul Barb serving as a “last resort” measure in case enemies come close.