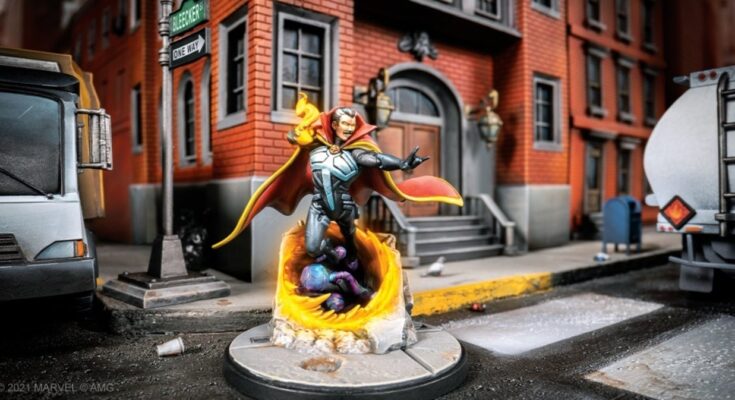 Marvel: Crisis Protocol is a miniatures skirmish game in which players control the heroes and villains of the Marvel Universe while competing against another player. Players can use any configuration of heroes and villains, provided their team’s total Threat Level is equal to or lower than the Threat Level of whatever scenario players choose to play through.

Doctor Strange’s new attacks include the Baleful Bolts of Balthakk, which comes with a Pierce effect, and the Deadly Daggers of Daveroth. The Deadly Daggers are an especially effective attack as Doctor Strange’s player can change the attack type – meaning that the Daggers can always target an opponent’s weakest defense. The Shining Circle of the Seraphim is another exceptionally strong ability. Not only is the attack an AOE attack, it also has the potential to heal any ally within the attack’s range.

Doctor Strange also comes with several useful superpowers, such as the Scalpel of Strange, which allows him to move himself or his allies across the board. Doctor Strange’s Mystic Armor of Strange and Eye of Agamotto allows Doctor Strange to re-roll various dice rolls, either negating failures or changing an opponent’s successes when targeted. Topping it off is Doctor Strange’s Chosen of the Vishanti, which grants him two extra power per turn, and an innate Flight ability.

Technically, this version of Doctor Strange can also serve as the leader of the Convocation, a new affiliation to Marvel: Crisis Protocol. This affiliation doesn’t have a set leader – instead, a player chooses a Convocation affiliated character and equips it with a Leadership ability.

Doctor Strange will be released in a new Character Pack coming out later this year.