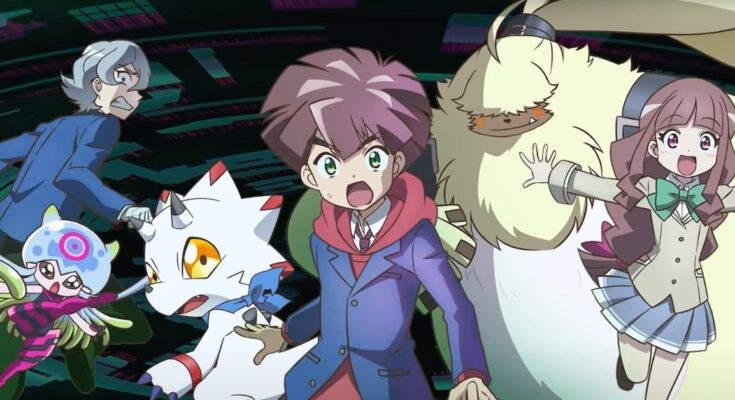 Digimon has released the first synopsis for its next anime series, Digimon Ghost Game. The 20th Anniversary Digimon Adventure reboot series is rounding out its final episodes, but rather than continue this walk down memory lane, Toei Animation will be pushing the Digimon franchise further into the future for what’s coming next. This will be a brand new series, Digimon Ghost Game, which offers a much spookier take on the franchise than what has come in the past. Now fans have gotten a better idea of what to expect from the new series thanks to its first synopsis.

Toei Animation has released the first synopsis for Digimon Ghost Game, and it offers up a whole new kind of take on the franchise than we have seen before as ghostly enemies seem to be attacking people in the real world directly. The synopsis (as shared by @Wikimon_news on Twitter) begins as such, In the near future, new technology has been developed. On social media, rumors have been circulating about strange phenomena of unknown authenticity known as ‘Hologram Ghosts.'”

“First year junior high school student Hiro Amanokawa activates a mysterious device left by his father called a ‘Digivice,’ resulting in unknown creatures that can’t be seen by the average person—Digimon—becoming visible to him,” the synopsis continues. “Since the day he met Gammamon, a mischievous Digimon that was entrusted to him by his father, Hiro has been caught up in various strange phenomena. There is a ‘Mouth-stitched Man’ who steals human time, and a ‘Mummy Man’ who wanders around every night kidnapping humans…”

The synopsis then ends with the major through line for the new series as a whole as this new gen of Chosen Children take on unknown enemies, “Hologram Ghosts are nearby, and are targeting us…From here on, this is a story about the other side of the world that no one is aware of. Together with Gammamon and his friends, Hiro sets foot into a mysterious world inhabited by Digimon.” But thankfully we’ll see soon enough as Digimon Ghost Game will be making its debut in Japan on October 3rd.

It’s yet to be confirmed where this series will be streaming alongside its debut in Japan, but we’ll get more information as the Fall 2021 anime schedule approaches. What do you think of Digimon Ghost Game’s description so far? Let us know all of your thoughts about it in the comments! You can even reach out to me directly about all things animated and other cool stuff @Valdezology on Twitter!