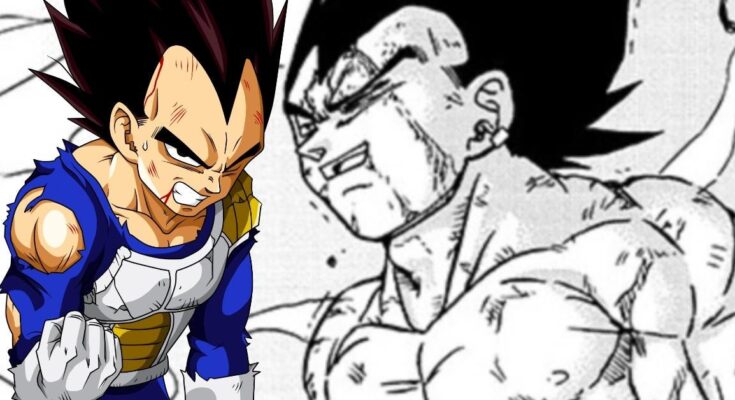 Dragon Ball Super had prepared Vegeta for death with surprising final words with the newest chapter of the manga series! The fight against Granolah has taken an unexpected turn as both Vegeta and Goku have been totally defeated in their attempts to take down the new foe. It’s a bit different for Vegeta, however, as he seems to be fighting even more for the pride of his Saiyan race rather than simply fight for himself. Vegeta even went as far as violently interrupting Goku when he tried to tag in, and took the fight to a different stage.

Wanting to defeat Granolah all on his own, Vegeta resolves his final effort in an attempt to get through the Cerealian and try to get to the bottom of all of Granolah’s blinding rage. In one final burst of power as he tried to get Granolah to think sensibly, he ends up looking death straight in the face as he’s left completely exhausted by Granolah. When the foe launches a massive blast of ki that Vegeta is to tired to even try and dodge, let alone try and fight back, he resolves himself to die for his belief that he can make Granolah see differently and prepares his final words.

As the fight against Granolah continues in Chapter 76, it becomes increasingly clear that Vegeta is seeking out a different kind of victory. Wanting to instead help Granolah free himself from the rage of his past (much like Beerus tried to do for him), he tries to stop Granolah from killing him. But this doesn’t work as Granolah still blames the Saiyans for all of his pain, and decides to burn away the rest of his life energy for one final attack to wipe out Vegeta completely.

Realizing that he couldn’t stop Granolah physically or mentally, Vegeta stops fighting back and decides to just accept his fate. Apologizing to Beerus, Vegeta says he couldn’t turn himself back into the cold fighter he used to be that only sought destruction. Noting that the God of Destruction’s power is far beyond his reach because of his moral and mortal hang ups, he accepts the fate of the Saiyans. Thankfully Goku snaps him out of it and saves him from death. But this is certainly a surprising new side of Vegeta that we haven’t seen before.

While we have seen a Vegeta on the verge of death just like this before, the first time around he realized how important those personal connections he formed were just a bit too late. This time around, he completely is aware of these connections but apologizes because he feels like he couldn’t detach himself from them like in the old days. These connections now make Vegeta who he is, and that person is a Saiyan who’s still willing to connect to the past if it means it’ll help him grow further. Like how Ultra Ego strengthens him the more he’s damaged, his mental scars also do the same.

But what do you think? Let us know all of your thoughts about it in the comments! You can even reach out to me directly about all things animated and other cool stuff @Valdezology on Twitter!