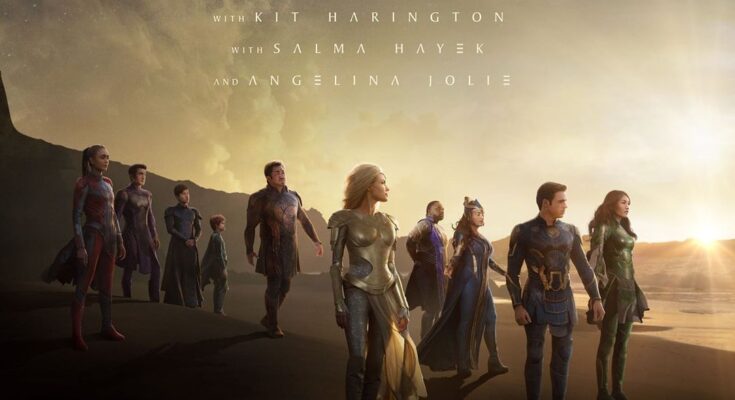 Marvel Cinematic Universe’s upcoming film, Eternals, is right around the corner and it will be arriving this November. Eternals will be the third MCU movie of this year and like “Shang Chi and the Legends of Ten Rings“, which is suppose to release in September. In addition, the movie will introduce a talented cast of brand new characters. Briefly, the film will follow the lives of the Eternals, an immortal alien race. As they spend thousands of years in hiding and observe human history without interfering.

They’re forced to step into the light after the rise of their mortal enemies, the Deviants. According to the sources, the film will also focus on the long-time relationship of Sersei and Ikaris.

Kevin Feige Is Not Sure About Theatre-Only Release Of Eternals

Eternals was originally suppose to release in November 2020 but because of the pandemic it was pushed to February 2021. Getting back to its current release date. The finalized date for the movie is November 5, 2021. In recent updates, Marvel Studios President Kevin Feige isn’t sure whether a theatrical release or an online hybrid release on Disney+ will happen.

Kevin Feige told Variety in an interview that he and Chloé Zhao both want the movie to have an exclusive theatrical release. But, only time will tell what happens. Furthermore, the Delta Variant is currently surging. As a result, Disney might opt for a hybrid release of Eternals considering the situation of the pandemic.

A Cast Full Of Promising Actors And Actresses

Marvel’s newest supergroup is full of big names and propitious newcomers. After playing the role of Minn-Erva in Captain Marvel, Gemma Chan will play the role of Sersei. This will be the second role of Gemma Chan in the MCU. Along with Gemma Chan, actors and actresses like Angelina Jolie, Salma Hayek, Richard Madden and Kit Harrington will play the roles of Warrior Thena, Ajak, Ikaris and Black Knight. Nonetheless, Kumail Nanjiani, Bryan Tyree Henry, Don Lee and Barry Keoghan are also in the film playing the roles of Kingo, Phastos, Gilgamesh and Druid.

It’s one massive and diverse cast which currently doesn’t even include the enemies of the Eternals, the Deviants. Eternals is directed by none other than Oscar-winning Nomadland director Chloé Zhao.

The MCU just dropped the trailer today and you can estimate the magnificence of this new Marvel project by the trailer alone.