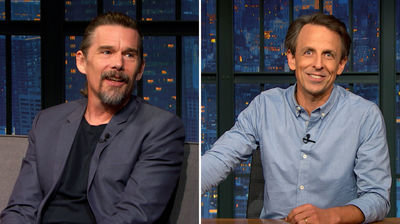 Marvel’s new series with a new character and new actor

Moon knight is a new Marvel series that will be coming on Disney plus. The lead role is played by Oscar Issac. Moon Knight is a character taking from the comics, it is created by Jeremy Slater. The series is scheduled to release in 2022. Here is everything you need to know about the series.

Other characters disclosed by the creator are May Calamawy and Ethan Hawke.

Cult leader in the series

Ethan Hawke recently came in the show ‘Late Night’ on Thursday which was hosted by Seth Meyers. Ethan came with a rather different look in the show. Everyone was shocked by his new look, then he shared about this new role he is doing in Moon Knight. Ethan’s new look had long hair, glasses and rather he had a gangster vibe.

Then Ethan shared that this new look is inspired by David Koresh. David was the head of the Davidian gang who died in Waco in 1993. Seth Meyers jokingly said to Ethan that he still looked so much into the character.

Meyers also asked humorously that ‘ Are you a fan of David in real life too’ to which he replied no, no he doesn’t want to be known for this.

Ethan had a confident and blood personality throughout the show and it just tells us how dedicated he has been towards this show and this character.

How was Ethan decided for the role?

Ethan also shared his experience about how he was chosen for this role. He said that the main character played by Oscar Issac lived three blocks away from him in Brooklyn. They randomly met in a coffee shop and Oscar shared how he is loving his role in the new series Moon Knight and asked if he would like to join him too. To which he thought it wouldn’t be a bad idea after all.