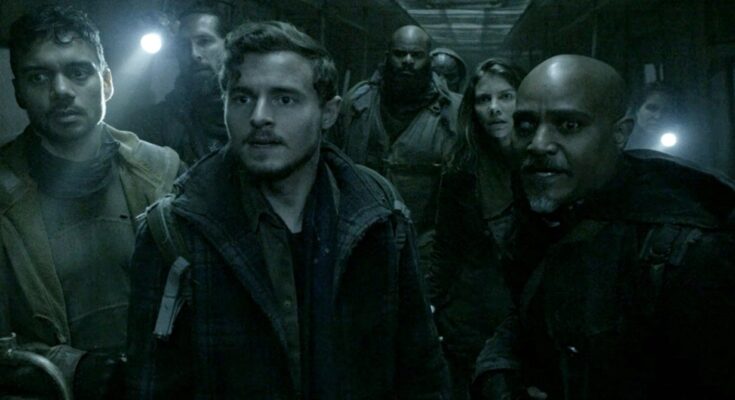 It’s the end of the line for a member of Maggie’s group when The Walking Dead claims its first kill of the final season. Spoiler warning for TWD Season 11 Episode 2, “Acheron: Part 2.” Leading a mission to Meridian that could save a starving Alexandria, Maggie (Lauren Cohan) and Daryl’s (Norman Reedus) team travels through subway tunnels when a violent storm erupts in the Season 11 premiere. After Negan (Jeffrey Dean Morgan) attempts to back out of Maggie’s “death march,” an unnerved Roy (C. Thomas Howell) and Gage (Jackson Pace) take off with the group’s ammo rations and supplies just before the group is swarmed by walkers at a tunnel choke point.

“Acheron: Part 2” reveals Roy and Gage got lost in the tunnels flooded by zombies. Inside the metro train where walkers have trapped Maggie’s group, Gage shows up alone and begs them to open a fastened door in the next train car over.

If it’s opened, they’ll let in the walkers closing in on Gage. Maggie can’t let that happen.

Alden (Callan McAuliffe) tries to open the door, but Duncan (Marcus Lewis) stops him. As the walkers stagger towards Gage, he apologizes for abandoning the group and pleads for a second chance. There’s time to get the door open, Alden says, but there’s not enough ammo to clear the dead.

“I’m sorry,” Maggie tells Gage firmly from behind the metal door. “I can’t.”

Gage’s fear fades as his face scrunches in fury. “Liar,” he growls, stabbing himself repeatedly in the heart to avoid being eaten alive. The walkers rip Gage open, tearing into his innards and devouring his flesh as he disappears into the swarm. What’s left of Gage reanimates, his zombified corpse clawing at the window.

He’s left a “shell of a man who died a coward,” according to Father Gabriel (Seth Gilliam), who later kills walker Gage with a shotgun blast to the face when the zombie horde forces its way inside the surrounded subway car.

“We felt that it was really important to come to a point in this story where a horrible decision had to be made. Gage is so young. I mean, the guy is kind of a jerk,” showrunner Angela Kang explained on Walking Dead: Episode Insider of the ex-Hilltopper who joined the militia formed to silence the Whisperers in Season 10. “He was part of the group that was bullying Lydia [Cassady McClincy] at Alexandria [in Season 10]. He was sort of complicit in this attack on her. But we thought somebody like that, who’s still kind of young and growing… He’s out on this mission because he wants to try to help and try to redeem something, but he made some bad choices, once again.”

Sadly Sacrifices needed to be made. #TWD pic.twitter.com/GN6n8u1PhY

Like Roy, who Daryl and Dog discover half-dead in the tunnels, Gage deserts the mission and takes their supplies with him. “Our people would have let him back in if they could have,” Kang said, “but I think when they look at the math of, you’ve got a herd of zombies coming after you, you were a coward, if we let you in, now we’re going to use our ammo, we’re going to use our energy. You might die anyway, and we might all die.”

“I think that Maggie kind of looks at that and she thinks like a general and goes, ‘You’re an acceptable loss in order for the rest of us to go on,'” Kang continued. “But that doesn’t make the decision any nicer or easier because he also takes his moment to kind of say, ‘F you.’ Like, if you’re going to do this, then you’re going to watch me turn in front of you. Like, that’s what’s going to happen.”