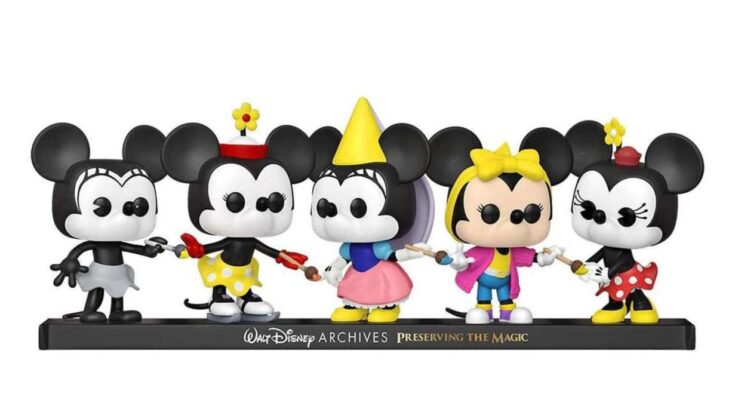 Last year, Funko and Disney teamed up on a Walt Disney Archives 50th anniversary 5-pack featuring Mickey Mouse, and it sold out on Amazon in a heartbeat. Now they’re back with a similar set that features Pop figure highlights from Minnie Mouse’s 93-year career.

Pre-orders for the Walt Disney Archives Minnie Mouse Funko Pop 5-pack are live here on Amazon for $49.99 while they last. The release date is set for October 28th. Again, if this Minnie Mouse Funko Pop set is anything like the Mickey Mouse one, it won’t be available for long (hopefully they made more this time). The good news is that the Funko Pops in the Mickey Mouse set were eventually sold individually, and Funko notes that the Minnie Mouse set will get the same treatment – probably sometime in September or October.

Speaking of Disney-themed, Funko Pops, a new wave of Pop figures for the Disney / Pixar classic Wall-E, and the first full wave of Pops from the 1963 film The Sword in the Stone launched yesterday. The Wall-E lineup included an adorable Wall-E and Eve Pop Moment and a a 10-inch Jumbo Wall-E Pop. There’s also a Mo (with a 1-in-6 rarity Chase), and Wall-E with a fire extinguisher. The Sword in the Stone wave included Merlin with Archimedes Pop and Buddy, Arthur, Madam Mim, and a 6-inch Super-sized Madam Mim as a Dragon (with a 1-in-6 rarity Chase). Details on all of these new Funko Pops can be found right here.