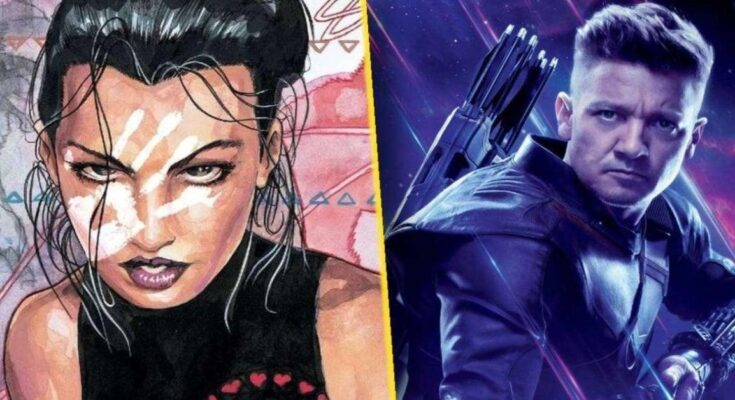 The first trailer for Disney+’s Hawkeye series made its debut on Monday, and fans have been relishing in all of the things it is expected to bring to the Marvel Cinematic Universe. In addition to the dynamic between Clint Barton (Jeremy Renner) and Kate Bishop (Hailee Steinfeld), the live-action series will introduce other characters into their orbit. This includes Maya Lopez / Echo (Alaqua Cox), a Native American and deaf hero, who has been teased to debut in the series before getting her own Disney+ spinoff. The trailer provided a brief, blink-and-you’ll-miss-it look at Cox in costume, bathed in red lighting, which you can check out below.

The aesthetic of this first footage of Echo definitely caught Marvel fans by surprise, especially given the character’s comic ties to Daredevil and those around him. While there’s no telling exactly who Echo could cross paths with during her tenure in the MCU, that hasn’t stopped speculation in the slightest.

Reports from earlier this year indicated that the Echo series was in “early development”, and the series is expected to begin filming in just a matter of months.

“We’re treating our shows as if we’re making our features,” Hawkeye producer Trinh Tran previously shared. “I mean, the feel and the quality of those TV shows are going to be like the Marvel movies that you’ve seen. So that’s always been [Marvel Studios president Kevin Feige]’s mindset of let’s make sure that when people are going to be watching these episodes, it’s going to feel like it’s just one long movie except rather than two-and-a-half hours, it’s going to be much longer. And the idea behind certain characters getting their shows is because we’ll have a lot more time to be able to develop these characters rather than the shorter.”

What do you think of the first look at Echo in Marvel’s Hawkeye trailer? Share your thoughts with us in the comments below!

Hawkeye debuts on Disney+ beginning November 24th. Echo has yet to set a release date.