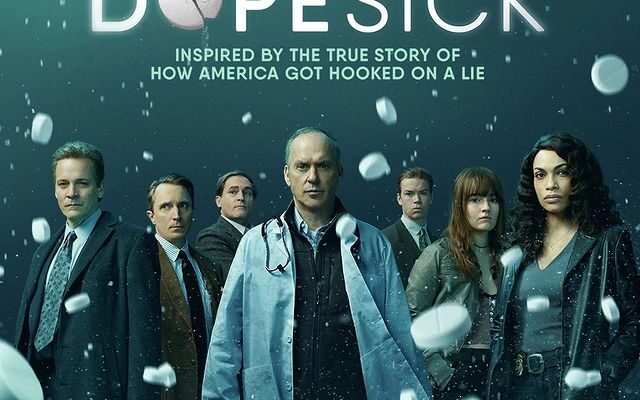 What Hulu has in stores for its viewers?

Hulu is bringing another drama series to its streaming service. This time it is coming with a legal thriller “Dopesick”. The opioid crisis drama will show how one company triggered one of the worst drug catastrophes in America. Hulu has released the teaser of the series in August.

The trailer of the series was dropped by Hulu yesterday. The series has a release date of 13th October.

The drama stars an amazing cast of Michael Keaton, Rosario Dawson, Will Poulter, Peter Skarsgard, Kaitlyn Dever, and Michael Stuhlbarg. The series, produced by Michael Keaton who is the lead of the series. Joining Keaton is the executive producer Danny Strong who also directed ‘Barry Levinson’.

Dopesick is a limited series offering a gritty drama of true events. The drama looks at the true events from a variety of angles, from the boards of Purdue Pharma to the aftermath of false advertising.

What is the series about?

The drama is based on “Dopesick: Dealers, Doctors and the Drug company that addicted America” a best-selling book by writer Beth Marcy. The book travels as to how a small community in Virginia became an epicenter for an opioid epidemic in America. Eventually, this epidemic lasted over decades.

The drama explores how the events shaped tragic events, consequently events such as child labor, facts dominated by the pharmaceutical company, and the ultimate goal of the people. The tale explores how marketing head Richard Sackler led a misinforming campaign to dupe doctors about the drug’s addictive usage.

Michael Stuhlbarg will be playing the role of Richard Sackler, executive of Purdue Pharma. Sackler will be the villain of the story where his plan is of global domination.

The first three episodes will be premiering on Hulu on 13th October, with new episodes arriving every Wednesday.