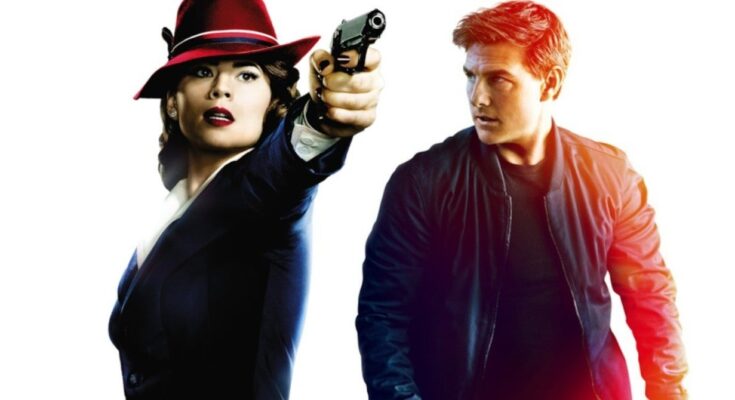 Production for Mission: Impossible 7 appears to be winding down after over a year and we’ve been seeing more and more new content from the highly-anticipated film. Recently, fans caught a glimpse of the cast in a new photo and an epic stunt video featured a train falling off of a bridge. We’ve also seen a lot of content from franchise newcomer, Hayley Atwell, who is best known for playing Peggy Carter in the Marvel Cinematic Universe. In fact, director Christopher McQuarrie took to Instagram this week to share a new photo of Atwell with Tom Cruise, and his message of thanks implies they just finished filming at Grand Central, Birmingham.

“Our sincerest and most heartfelt thanks to: Nita Chambers, Kelsey Dwyer, Nicola Demagalski
@Bullring #bullringandgrandcentral And the rest of the staff at Grand Central, Birmingham. Along with: Felicity Jump, Craig Stenning, Patrick Power, Stewart Moore, Shakeel Mohammed, Jessica McLoughlin-Carroll, Lucy Martin, Chantel Abbott, Glyn Tinsley, Gavin Whitehouse, And the Network Rail staff at New Street Station. Special thanks to our fabulous and unflagging background artists and, of course, the wonderful people of Birmingham. Without your support, it would have been impossible,” McQuarrie wrote. You can check out the photo of Cruise and Atwell below:

It’s interesting that McQuarrie used the hashtag for both MI7 and MI8 as it’s been unclear when production for the eighth installment would begin. Originally, the two movies were supposed to film back to back, but it was reported earlier this year that production on the still-untitled eighth movie would begin after Tom Cruise completes promotional duties for Top Gun: Maverick. However, it also reported recently that Mission: Impossible 7’s release date had been pushed back, which is also now the case for the new Top Gun. That meant it was unclear when MI8 would begin filming, but McQuarrie’s recent post has us thinking there may be some production overlap.

Mission: Impossible 7 will see the return of Cruise as well as Ving Rhames, Simon Pegg, Rebecca Ferguson, and Vanessa Kirby. In addition to Atwell, Marvel’s Pom Klementieff will also be making her franchise debut. Earlier this year, it was announced that Rob Delaney (Deadpool 2), Charles Parnell (Top Gun: Maverick), Indira Varma (Game of Thrones), and Mark Gatiss (Sherlock), would be joining the cast. Henry Czerny, who played Kittridge in the first Mission: Impossible, will be making his first franchise appearance since 1996.

Mission: Impossible 7 is currently scheduled to hit theaters on May 27, 2022.