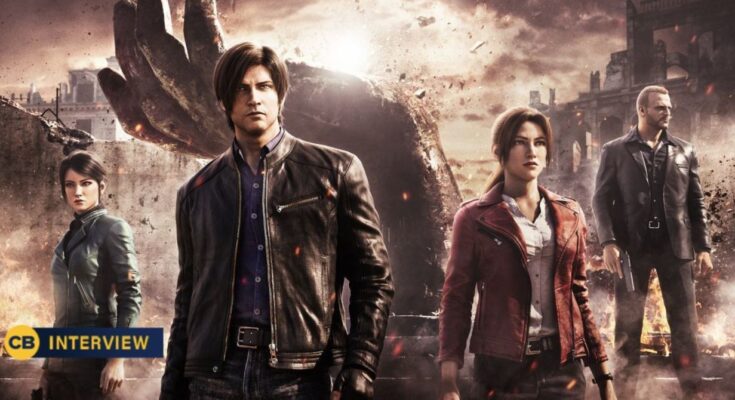 Breaking Into Anime for Resident Evil and Director Eiichiro Hasumi Himself

Eiichiro Hasumi: Well, obviously it goes without saying that the series, the franchise has fans around the world. As you brought up, Nick, it’s for the first time to deliver this series format to 190 countries around the world at the same time through Netflix. And so, the biggest thing for me was not to betray the fans’ expectation because it’s so beloved. To do that, I [worked] really closely with Hiroyuki Kobayashi, the producer from Capcom. He would be my guide into making sure that I get the world and everything else right. I strive to make something that the true fans can enjoy.

Bringing Leon and Claire Back for Infinite Darkness

CB: Speaking of the fans, one of the biggest things they’ve reacted to was Leon and Claire showing up once more and reuniting in this series. What was the care in bringing these characters specifically to the show? What kind of work went into that?

Hasumi: The series has a very concrete timeline and who the characters are, so when it is or who they are, of course, but also who they have just met or what had just happened. [The translator during our interview also stated, “He doesn’t use the word canon, but it’s all sort of canon,” at this point.] And portraying Leon in this show, it was about where is he and his history within those timelines, and that becomes really important.”

CB: Speaking to that, there are new characters introduced in Infinite Darkness. How was the process in introducing these new characters and making sure they fit within the greater timeline?

Hasumi: I did give consideration as to the fit, but I really approached all the new characters as I would in all my live action film making. And those non-Capcom characters, should we say, I was given a lot of freedom to do basically whatever I wanted. I hope the fans really enjoy the fact that I made the President Ashley’s dad, and I even show a picture of them in the show. But with characters like Jason, I was completely free to do whatever I had wanted.

He’s…a huge opponent, at the same time, I wanted him to kind of mirror Leon in that they share a same sense of justice, in a way. They both saw hell in Raccoon City and Penamstan, respectively, so there’s an understanding, a sympathy between them. He was really formidable to be the counterpart to Leon as, I guess, a sort of a bad guy in the film. That’s how I approached that particular character.

CB: One of the most impressive parts of this series are the zombies. Zombies are a big part of Resident Evil, so was there a monster or creature wanted to include but couldn’t?

Hasumi: There wasn’t anything that I couldn’t do like that, so I’m really satisfied. But my partners [at Quebico] working on the full CG animation had already worked on a Resident Evil series, so they had a lot of knowledge about zombies and the monsters in the franchise. I would consult them and try to come up with the coolest zombies for the show, and kind of design them in that way. But with the rats [in Episode 2] specifically, I was thinking that wouldn’t it be really scary to be attacked by these tiny, small creatures in a submarine? I didn’t know what that was, but we decided on a rat. And so, I got to do that too.

Could There Be More Resident Evil or Anime for Hasumi?

CB: Now that you have directed your first anime series, is anime a potential path that you might consider further, more anime projects potentially?

Hasumi: I really approached the show as I would do with my live action film making. But all the staff from the animation side were amazing to work with and they had thus knowledge that [the] live action crew would not have, and I found that to be really refreshing. I’d love to work with them, the animation staff on my live action projects in the future. And at the same time, I felt really sad when the show was coming to an end. I really feel like I want to make another CGI animation project.

What Should Resident Evil Fans or Non-Fans Take Away?

CB: What do you hope for Resident Evil fans and non-fans alike to take away from Infinite Darkness?

Hasumi: This is in a show format, four of roughly 30 minute episodes. You can obviously binge it and watch it like a two hour film, but it is structured in a way that slowly, things come to light. It’s like turning over cards with each episode. Things in the past that come to light pieces kind of come together. I hope the mystery, and that suspenseful aspect of the story appeals to the viewers. Even if you’re not a fan of the Resident Evil series, I think you could enjoy it as a drama, as well. And obviously, there are so many fans with its long history, but I hope it also cultivates new fans too.

CB: Now for this final one, it’s a spoiler, so I don’t know how much you can actually answer. [Infinite Darkness] ends on a kind of a cliffhanger, teasing that there’s more in the story for Leon to do, more for Claire to do. Is that something that might be on the table for the future, like a season two?

Hasumi: I feel like if a lot of people watch Infinite Darkness and ask for a continuation, I think that would be a possibility. And I would love that, for that to happen.