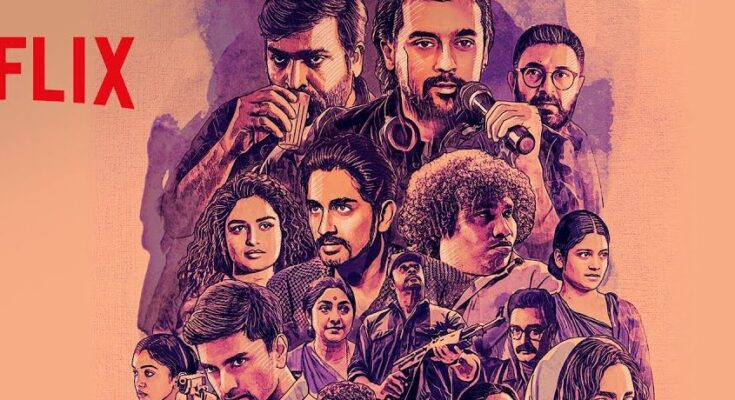 A bag of different Emotions

Navarasa, the anthology film directed by Mani Ratnam and Jayendra Panchapakesan, is centred on 9 episodes each depicting a particular emotion also known as rasa.

The first episode is Revathi’s Edhiri. While Vijay Sethupathi aka Dheena brings out anger, Revathi aka the stranger’s wife is the compassionate one. It follows Dheena as he unleashes years of pent-up hatred on a stranger by killing him who mistreated his brother. while the man’s wife stands in silence. An air of despair dominates the short film throughout. The story is pitched as compassion, although the stranger’s wife had her conflicts.

The second film Summer of 92, directed by Priyadarshan and starring Remya Nambeesan and Yogi Babu, promises to be a comedy. However, the picture fails to amuse, and a few politically incorrect gags are hardly amusing, Yogi Babu aka Velusamy says that education is not important to be successful—a message that comes off as overused and the plot lacks creativity.

Vasanth Sai’s Payasam tells the narrative of a Brahmin wedding, starring Rohini, Aditi Balan, and Delhi Ganesh. The story follows a Brahmin guy who is concerned about his widowed daughter. Although the film’s theme is ‘disgust,’ the feeling of envy plays a significant role. The widow, played by Aditi Balan, fails to connect with the audience.

As the audience watches Karthik Subbaraj’s production of Peace, Bobby Simha’s Nilavan and Gautham Vasudev Menon’s Cheran Master battle against the rebel forces in the Sri Lankan army. Simha helps the child make peace, but Nilavan‘s dictates the rest of the narrative. There are also heart-wrenching, thrilling moments when both protagonists engage in action more than conversation.

Arvind Saami’s directorial debut is Roudram. Roudram is a well-directed short film with an intriguing plot, starring Riythvika as police officer Anbukarasi. Anbu and her brother Arul, the children of a domestic helper named Chitramma, are victims of the social structure. Roudram is a revenge thriller.

This anthology fair, which is a relatively new idea in Tamil film, intrigued many feelings, some hit right at the spot but also missed some important ones.