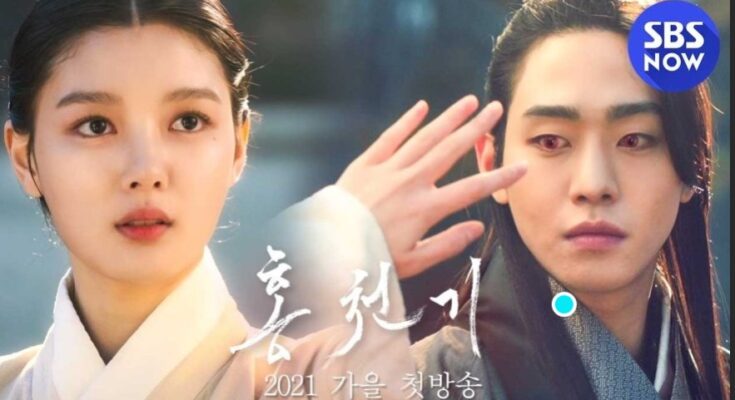 A new teaser to tease fans

The highly anticipated K – Drama Lovers of the Red Sky, has just dropped the new teaser. Shared by SBS the trailer is already generating a lot of excitement.

Lovers of the Red Sky will be a historical fantasy K-drama set in the Joseon Era. It is based on the hit novel ‘lovers of the red sky’ by author Jung Eun Gwol. The other two novels by Jung Eun Gwol , the ‘ Sungkyukwan Scandal’ and ‘the moon embracing the sun’ have both been adapted into K-dramas and have gained popularity.

The role of Hong Chun Gi will be played by Kim Yoo Jung . She will be seen as Joseon Dynasty’s only painter. She was born blind but miraculously regains her vision. Ha ram will be a blind astrologer who will be able to read the stars even though he can’t see. The character will be played by Ahn Hyo Seop. The Lonely and romantic prince of the era will be played by Gong Myung , whose name in the series will be Prince Yangmyung.

The new teasers captures some soulful moments and an enthralling love triangle between Hong Chun Ji, Yangmyung and Ha Ram. In a delicate moment shown in the trailer , Hong Chun Gi is heard telling Ha Ram ” Your eyes are really beautiful” to which Ha Ram replies how when people see his eyes they call him a monster. She doesn’t believe it and says ” but your eyes are so beautiful.” He loves how she is so genuine and pure because of which his lips curl into a soft smile.

The teaser also captures the light-hearted and fun chemistry between Yangmyung and Hong Chun Ji. Yangmyung is dressed in rags so when he introduces himself as a prince to Hong Chun Ji, she bursts out laughing, he is drawn to her honesty.

The teaser also shows a scene where the love triangle between the three can be witnessed. Yangmyung and Hong Chun Ji race in the pouring rain. Ha ram shows up and says ” she committed to me first.”

The enthralling chemistry between the two pairs can be witnessed on August 30th, when Lovers of the Red sky is releasing.