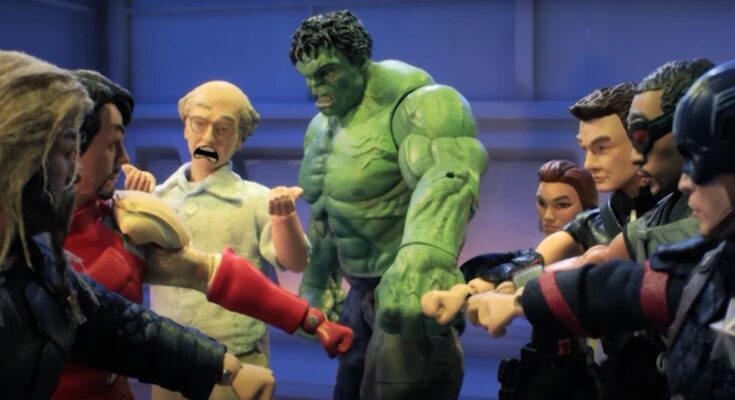 This newest clip from Robot Chicken Season 11 reveals that Larry David actually caused Thanos’ snap and teams him up with The Avengers! The eleventh season of the Adult Swim animated series is gearing up for its premiere in just a matter of days, and as one of the current landmarks of the network as a whole from its over 20 years of broadcasting, there is quite a lot to be expected from the new episodes. With the series always taking time to parody current events and mashing them together with other elements of pop culture, it’s had its fair share of comic book movie parodical takes over the years.

To help gear up for the premiere of Season 11, Adult Swim has shared a fun new clip of Robot Chicken‘s new episodes that features a spin on Larry David within the Marvel Cinematic Universe. Somehow inspiring Thanos to use his snap when he’s overheard in a crowded restaurant, David then gets recruited into The Avengers line up when they seek to save the world from what the comedian had caused. You can check it out in the video above!

Robot Chicken Season 11 will be kicking off on Monday, September 6th at midnight EST on Adult Swim. The new episodes will be airing on a nightly basis Monday through Thursday from its premiere on September 6th until Thursday, September 23rd on the network as well so there will be plenty of opportunities to catch the new season in action. Created and executive produced by Seth Green and Matthew Senreich, and their partners at Stoopid Buddy Stoodios, John Harvatine IV and Eric Towner, Green and Senreich also write, voice and direct the series alongside Tom Shepard.

Adult Swim teases Robot Chicken Season 11 as such, “The Robot Chicken Nerd and Bitch Pudding are also back along with a spooky Halloween-themed episode. And not to disappoint, no corner of pop culture is safe from Robot Chicken’s satirical gaze this season. The show skewers today’s biggest hits and classics including fan-favorite characters from movies, television shows, video games, celebrities, and even nursery rhymes – Robot Chicken spares nothing and no one and prides itself on having the most comedy a quarter-hour sketch comedy show can provide!”

What do you think of this newest clip from Robot Chicken‘s newest season? What are you hoping to see in the new episodes coming later this month? Let us know all of your thoughts about it in the comments! You can even reach out to me directly about all things animated and other cool stuff @Valdezology on Twitter!