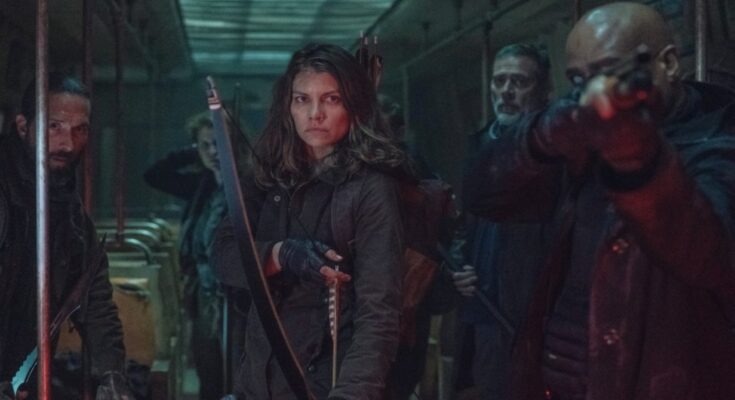 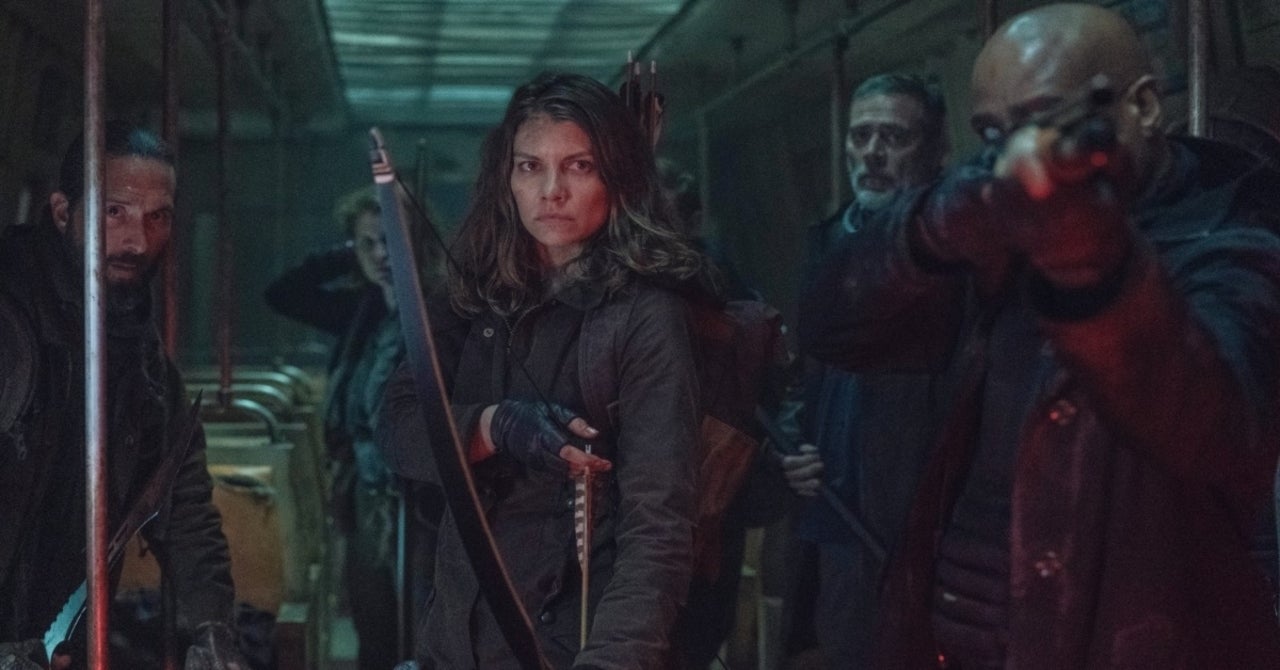 Lauren Cohan says it was “hard to stomach” the twisted tale Maggie tells in The Walking Dead “Acheron: Part 2.” When Maggie’s Meridian-bound group of survivors takes refuge in a subway train surrounded by walkers, a deserter is left outside to die a coward’s death. Alden (Callan McAuliffe) challenges Maggie and Father Gabriel (Seth Gilliam) over Gage (Jackson Pace) dying “in the worst way imaginable” — torn open by zombie teeth and claws — but Maggie counters there are worse ways to die. A lot worse. In the darkness of a zombie-swarmed subway car lit by the red glow of a flare, Maggie finally shares the story she couldn’t tell before.

Before they met Elijah (Okea Eme-Akwari) and his people, the Wardens, Maggie recalls surviving alone on the road with her son Hershel (Kien Michael Spiller). Starving, the Rhees come across a frail old man kneeling by an overturned grocery cart filled with scavenged clothes for his sons and daughters.

If they help him haul the cart back home, Maggie remembers, he’ll give them food for their trouble. Knowing he’s a liar but wanting to feed her son, Maggie follows the old man to his house and overcomes him with the pocketed chloroform rag he intended to use on her.

Locking her son away in a room, Maggie searches the house and finds three “deformed” males who give chase. Maggie handles them. The house is filled with an eerie silence except for a thudding from the attic.

Maggie investigates, expecting to find tied-up prisoners, but she’s stopped by the sight of a shadowy figure writhing and rocking at the top of the stairs. The animalistic shadow plunges down the stairs, landing at her feet and revealing its form: a walker that used to be a woman. Its arms and legs cut off and stitched up, eyes gouged out, tongue removed, the mutilated corpse wheezes through an open, cauterized gash in her throat where her vocal cords used to be.

Its belly round and full, Maggie remembers, stuffed with something trying to get out. Upstairs, Maggie finds three more women — hearts still beating — meaning only one thing: “If they’re alive, there must be food here.” Maggie puts them to rest and finds enough food to fill up the old man’s grocery cart.

“I don’t feel anything when I tell you that,” Maggie tells Alden, “because that is what’s out there. And seeing it, I lost something. And I don’t think it’s a bad thing that I did. Because it has made things so much clearer.”

It’s part of the dark history that Maggie told Daryl (Norman Reedus) was a story for another time in “Home Sweet Home,” part of the extended Season 10 bonus episodes.

“I read that and I thought back to 10C when we had the episode when Maggie tells Daryl ‘these are the things that happened.’ I had kind of alluded to this horrible stuff on the road,” Cohan said live on Talking Dead. “You know the comic, how it addresses the Governor and his world, and we never need to go into that much detail in the show. This is kind of one of the really only times that we’ve touched on that real depravity, and I think it’s important and it’s a good lesson.”

Maggie’s story in “Acheron: Part 2” was “definitely hard to stomach,” Cohan said, “but I think it’s what they needed to hear. It’s to protect their kids from making mistakes, and I think that’s at the root of what she’s doing.”