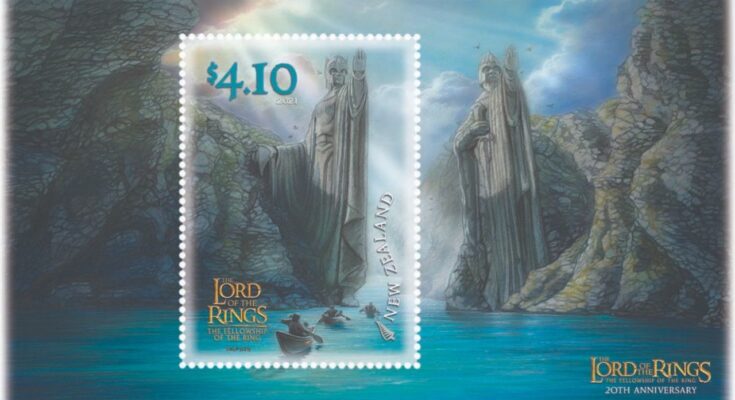 Twenty years after Peter Jackson’s The Lord of the Rings trilogy changed the face of New Zealand’s tourism industry, the nation has released a first look at their stamps timed to celebrate the anniversary. The Lord of the Rings: The Fellowship of the Ring was released theatrically on December 19, 2001, and went on to earn almost $900 million at the global box office against a budget of $93 million. Its reliance on real locations and practical sets constructed in New Zealand means that many of the most visually memorable spots in Middle Earth, are places fans can visit in the country.

Sacha Lees, who worked on the films, created the artwork for the stamps. Lees also worked on the original run of The Lord of the Rings stamps in 2001, which proved so popular that the New Zealand Post decided to revisit the idea for the film’s anniversary.

“These stamps acknowledge that this iconic film is now a significant component of New Zealand history, culture, and identity,” said Antony Harris, NZ Post Head of Stamps and Collectables.

You can see the stamp below. The Lord of the Rings stamps, first-day covers, “presentation packs,” and more are available on NZ Post’s website.