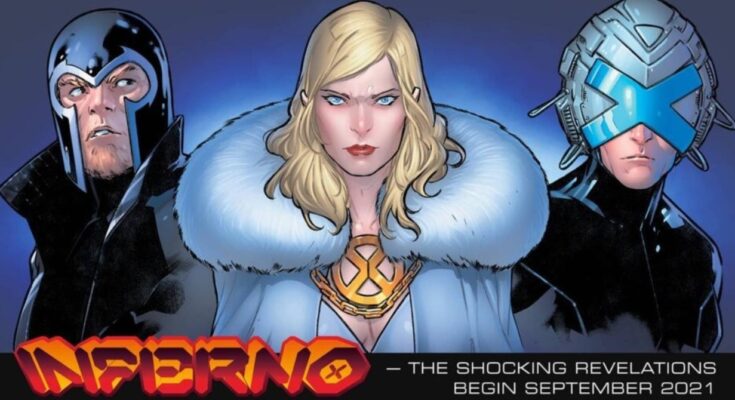 The X-Men corner of the Marvel universe is right in the middle of its Reign of X era, and we’re beginning to see all of the complicated ways that is taking shape. Among them is the upcoming Inferno arc, which will play out in a four-issue limited series this September. To get fans hyped — and potentially worried — for what Inferno has in store, Marvel Comics recently debuted a trio of promo images, which are courtesy of artist R.B. Silva. The images pay homage to the house ads Marvel used to promote the original Inferno arc, with everyone from Emma Frost to Moira MacTaggert to Destiny being shown as players in the event.

“There will be an island—not the first, but the last…” Destiny’s foreboding words have stuck with Mystique—and fans—since the very beginning of the age of Krakoa. Now, a day of reckoning is upon mutantkind’s leaders, and the shocking payoff to seeds planted in House of X and Powers of X arrives in mastermind writer Jonathan Hickman’s brand-new X-Men series: Inferno!

Promises were made and broken. The rulers of Krakoa have been playing a dangerous game with a dangerous woman, and they are about to see how badly that can burn them. Having been denied her wishes yet again, Mystique is ready to follow through on her promise to burn the nation of Krakoa to the ground. Mutantkind’s bright future is threatened like never before as Hickman brings his game-changing plans to a head. Fans can expect more revelations from the lives of Moira MacTaggert, Nimrod’s revenge, vicious power plays, and more in this pivotal chapter in X-Men history.

“I’m very excited that we’re finally getting to share with everyone the follow-up to House of X/Powers of X,” Hickman said in a statement. “The story is 160 pages over four issues drawn exquisitely by Valerio Schiti, R.B. Silva and Stefano Caselli. I cannot wait for people to read it.”

Are you excited to check out Marvel’s new take on Inferno? Share your thoughts with us in the comments below!

Inferno #1 will be released on September 29th. Silva’s promotional teasers are also set to be available as a special homage cover.