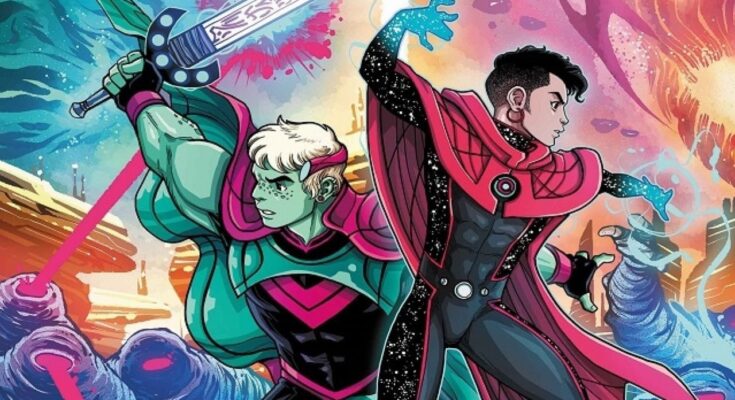 The latest Marvel Comics cosmic event is moving along at a brisk pace, potentially leaving some major destruction in its wake. As we all know, no one is really dead in the land of comics, and The Last Annihilation is about to change things substantially amongst the stars. In fact, the latest entry in the mini-crossover brought back one of the cosmos’ most dangerous characters: the Kree Supreme Intelligence.

In The Last Annihilation, Dormammu is currently invading five separate cosmic strongholds in an attempt to get a solid footing in this reality. You know, because he needs to rule anything and everything under the sun. Somewhere along the way, the Supreme Intelligence has been reactivated and is threatening to destroy what remains of Throneworld II.

The issue ends without a solid resolution, only that Wiccan decides to take on the issue head-on as other members of the Guardians of the Galaxy stand by and watch.

At one point, Captain Marvel was also supposed to feature a comics-accurate depiction of the Supreme Intelligence, though it was scrubbed from the final version of the movie.

“It came and went,” Captain Marvel production designer Andy Nicholson told us about the inclusion of the “real” Supreme Intelligence. “As an idea, it was never rejected. At one stage, it was part of the movie. I’m not the person to say whether or not that will eventually come back in but it was part of it.”

“It was there. We did develop a line where within that space from the big pool of water in the back of the room, that eventually, that’s where the big green head would come out of,” he added. “I think eventually for the final scene of the movie, it would’ve taken away from what was the core focus which was, it would’ve been a big spectacle which would’ve overwhelmed the main thrust of what we were doing which was talking about Carol’s development and transformation into Captain Marvel.”

The Last Annihilation wraps up in Guardians of the Galaxy #18, due out September 22nd.

Have you been keeping up with the latest Guardians run? If so, let us know your thoughts about the cosmic tales either in our comments section or by hitting our writer @AdamBarnhardt up on Twitter to chat all things cosmic Marvel!