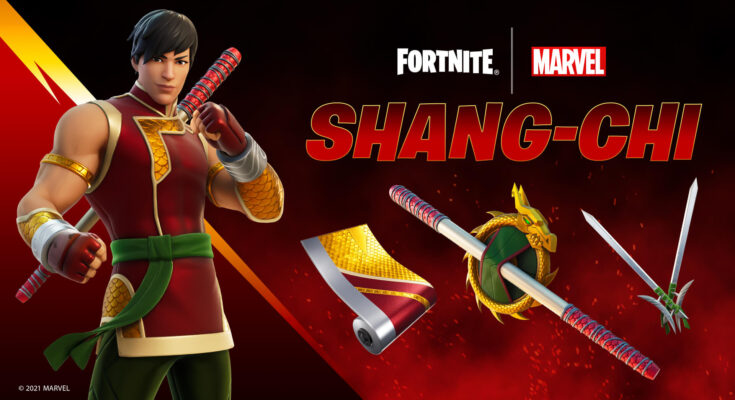 Shang-Chi is getting his very own cosmetic bundle as well

Now that Marvel Studios’ Shang-Chi and the Legend of the Ten Rings is a roaring success, it’s time for his next outing. Fortnite, the popular battle royale known for having a wide roster, is bringing the character in!

The last few seasons had a ton of crossovers and the primary skins were from Marvel. Characters from video games, comic books, films, and television shows have all come in to the island.

Ever since Fortnite started their crossovers, Marvel played a huge part in it. One of the earliest characters was Deadpool, who debuted in the game’s second season. Iconic villains like Thanos with his Infinity Gauntlet and new additions such as Wakanda and the Stark Tower was added.

Shang-Chi got added as a supporting event to the movie, which released on September 3.

Shang-Chi is regarded as one of Marvel comics’ most skilled hand-to-hand fighter, and him, along with his combat regalia is present. His bundle includes his costume, a back bling shield, a sword skin for the pickaxe, as well as a Dragon’s Scale sword. The bundle is now available for players to purchase.

Fortnite is the only game which has such a huge crossover in it. Other characters included John Wick, the Mandalorean, DC characters like Batman and Superman, among many others. Before Shang-Chi, Will Smith’s character Mike Lowery from Bad Boys made his entry. This goes to show that Epic Games is looking to add any and every iconic movie character.

Adding him to Fortnite will be a great way for promoting the movie. The character is already standing apart from the rest of the Marvel heroes, with his dual swords bright green belt.

Have you downloaded the latest update yet?