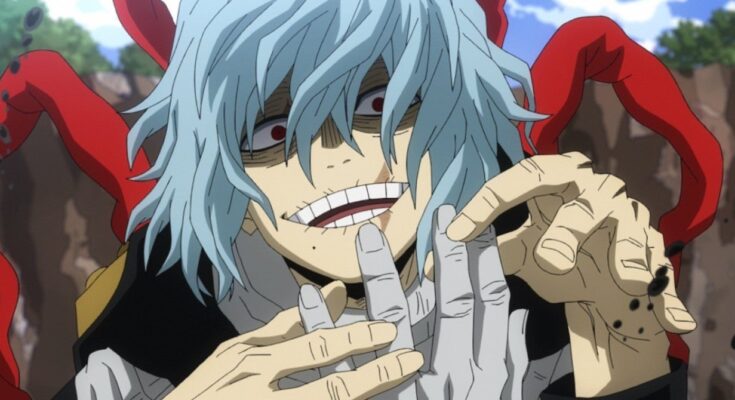 My Hero Academia has set up a major villain war, in the cliffhanger ending to its latest episode. Season 5 of the My Hero Academia anime is now in its “My Villain Academia” arc, which follows what Tomura Shigaraki and the League of Villains have been doing in time leading up to the big war that the pro heroes have been preparing for. Shigaraki makes contact with All For One’s disciple Dr. Ujiko, who challenges Shigaraki to evolve himself into being the true leader of the League of Villains. That challenge gets upped exponentially when a rival syndicate comes gunning for Shigaraki and the League!

In My Hero Academia Episode 108, “My Villain Academia” Dr. Ujiko tasks Shigaraki by proving his worthiness as All For One’s successor by taming the villain overlord’s gigantic hulking monster, Gigantomachia. However, Gigantomachia takes one look at Shigaraki and refuses to submit, forcing the League of Villains into the mountains for a month-long trial of battling the gigantic man in an attempt to heel him.

Just as Shigaraki is beginning to get the hang of how Dr. Ujiko is trying to instruct him, the League of Villains gets blindsided by a whole other rival crew: the Meta Liberation Army. The MLA’s leader, Re-Destro sends a message to Shigaraki via identity-masking electronics, declaring the MLA’s existence and declaring their might. According to Re-Destro, the group (based around the teachings of the revolutionary figure Destro) has over 100,000 strong positioned across Japan ready for a major strike – but the first thing Re=Destro intends to do is crush the League of Villains, who he sees as stealing the spotlight of villainy. To get that ball rolling, Re-Destro has kidnapped that League of Villains’ secret financial broker Giran and is holding him hostage in Deika City.

For a moment it looks like Shigaraki is outnumbered and outgunned, but then we get a reminder of just how devious the League of Villains leader really is.

Shigaraki has two big problems pressing him at the moment: taming Gigantomachia and stopping the Meta Liberation Army. But in those two problems Shigaraki sees one solution: point his two problems directly at one another! All For One and Dr. Ujiko programmed Gigantomachia to be able to sense and seek out Shigaraki anywhere, as part of the leadership trial; well, with the MLA baiting Shigaraki into an obvious trap, the League of Villain leader acquiesces that there’s no better place for him to be than smack-dab in the midst of his enemies.

My Hero Academia has now set the stage for an all-out villain war to go down in the next episode, and we couldn’t be more excited! The anime streams new episodes on Funimation and Hulu.