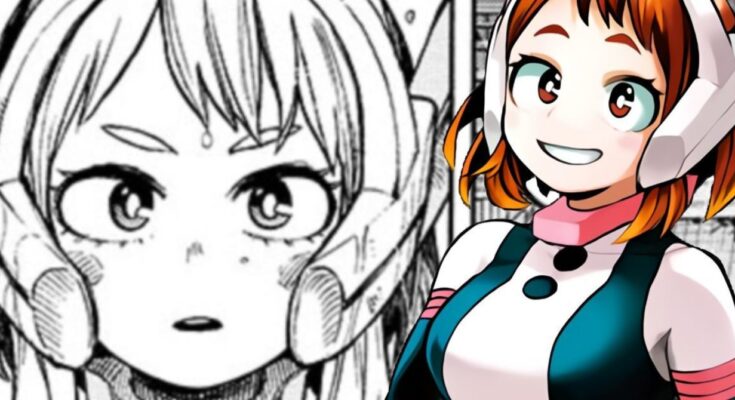 My Hero Academia introduced Ochaco Uraraka’s surprisingly dark side with the newest chapter of the series! Izuku Midoriya has been really feeling the pressures of One For All and he’s been isolating himself even more since first leaving U.A. Academy at the beginning of the Final Act. As the chapters continued, we have seen him begin to break down even more as he fights alone worried that anyone near him would get caught up in the wake of All For One’s villainous machinations. But this changed with the previous chapter of the series.

As Izuku wore himself down physically and was nearly taken out by another one of All For One’s hired mercenaries from Tartarus, he was surprisingly saved by Katsuki Bakugo. The newest chapter of the series revealed that he wasn’t the only one there, but the entire Class 1-A line up had shown up to save him to. In the chapter’s exploration of the immediate fallout of Izuku’s leaving U.A., it also introduced Ochaco Uraraka’s surprising dark side when it comes to Izuku.

Chapter 319 of the series explores the fallout of Izuku’s leaving U.A. Academy and officially telling the rest of his former classmates about his One For All secret. The class themselves are trying to figure out where Izuku has gone, and figure out that All Might and the pro heroes have been helping him keep the secret from them. So Ochaco takes the lead of pressing the issue further by exploiting the fact that Endeavor’s an U.A. alum to get him to have a meeting with the principal.

They all eventually get the permission to help Izuku and bring him back, and soon Ochaco and the others confront him face to face. Seeing him broken down, Ochaco intensely says they’re all worried about him, but he refuses to back down still. Knowing he would react this way, she along with the rest of the class prepares to take him down by force if necessary. When it comes to Izuku, Ochaco is willing to push and shove in order to save him.

She’s gone to great lengths in the past, and although she’s acting intensely here, it’s all for Izuku’s greater benefit as she and the rest of the class are more worried about him than ever before. The way she’s approaching it, she’ll take him down herself if it means saving Izuku from greater harm. But what did you think of Ochaco and the others in the newest chapter? Let us know all of your thoughts about it in the comments! You can even reach out to me directly about all things animated and other cool stuff @Valdezology on Twitter!