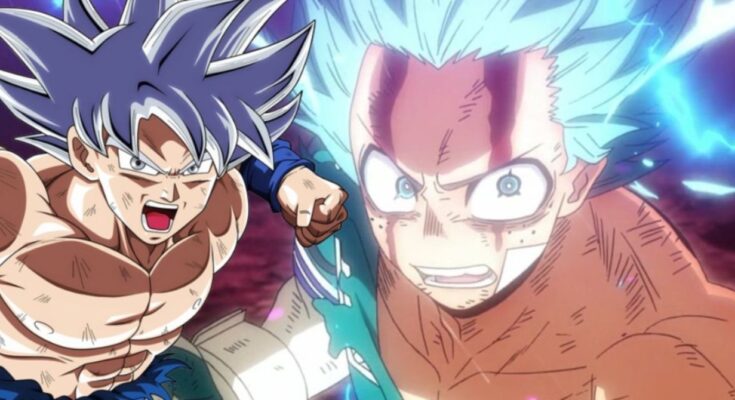 My Hero Academia has unleashed its own take on Ultra Instinct with the newest chapter of the Vigilantes manga series! As Koichi Haimawari has worked as a vigilante for the past few years, his fighting style has shifted and changed the more experience he gets in the field. Unlike the heroes who attend school in the main series, Koichi instead has been getting nothing but real world fighting experience through his time thus far. And those experiences have fine tuned his body’s reflexes to a heightened new level as demonstrated in the newest chapter. A very familiar level to Dragon Ball Super fans.

The newest chapter of My Hero Academia: Vigilantes sees Koichi taking on Number 6’s monstrous new form. While he was suddenly able to keep up with Number 6’s violently fast attacks in the previous chapter, and counter moves without thinking, the newest chapter of the series has revealed that he can now enter a purely reflexive an instinctual state much like Goku’s Ultra Instinct form in Dragon Ball Super.

Ultra Instinct is Goku’s angelic like state that he has had to train quite a bit to not only use willingly, but is still training how to master it properly. It’s a state that allows his body to move free of thought and both dodge and counter other attacks reflexively. Chapter 108 of Vigilantes reveals that Koichi’s fighting has brought him to a state much like this as well that activates on its own. Like Goku’s Ultra Instinct use initially, Koichi just sort of falls into this ability.

It’s a state that he himself is unaware of and is described as “A monstrous warrior whose reflexes are trained to counter attack. An unthinking dancer.” Koichi’s speed has been fine tuned to such high levels that he himself is not aware of how fast he could be. Like Ultra Instinct, this state cannot be used willingly yet and likely exhausts him at a much faster rate, and unlike Goku, Koichi just isn’t built for that kind of god level fighting.

But what do you think of Ultra Instinct making its way to the My Hero Academia universe in this way? Do you think Koichi will be able to tap into this state even more as the fight continues? Let us know all of your thoughts about My Hero Academia: Vigilantes, Dragon Ball Super, and everything else anime in the comments!