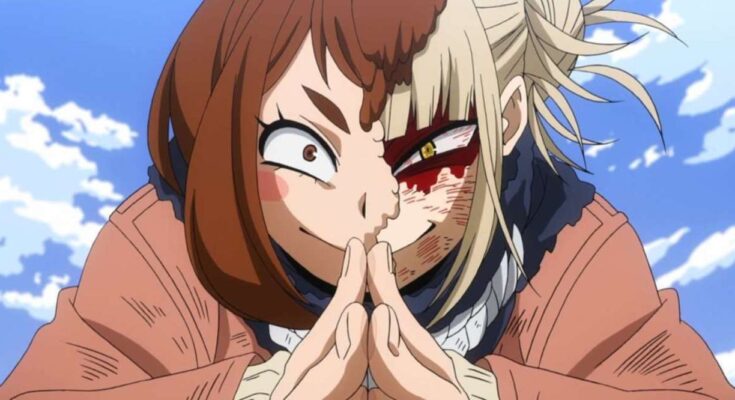 My Villain Academia has kicked off the war between the League of Villains and the Meta Liberation Army, with Shigaraki and his gang staring down over one-hundred thousand opponents as they attempt to prove themselves worthy of the gifts of Dr. Garaki and All For One. With this latest episode focusing on the disturbing backstory of Toga, as well as her specific fight against MLA member Chitose Kizuki, aka Curious, we see the blood-drinking antagonist develop an insane new ability to help her not only survive but make her a far bigger threat than she was before.

Most of this latest episode sees Toga recalling some of the terrifying events of her past, wherein the young villain was forced to hide her true self, as her love of blood-drinking didn’t go over well with both her family and her classmates. While her Quirk was always just as disturbing as its user, with her blood-drinking allowing Toga to take on the appearance of whomever she stole said blood from. Unfortunately, this power backfires on her in this recent installment as Curious is able to actually detonate the blood that she drinks during her fight with the numerous members of the MLA, putting her in quite a difficult situation.

As Toga attempts to flee from the never-ending assault, she downs a special vial of blood that she had been saving from Ochaco, aka Uravity, transforming into the young hero and revealing that she has now developed the ability to mimic the Quirk of her victims to boot. Speeding through the ranks of the Meta Liberation Army, Toga uses Uravity’s powers to float a number of the villains into the sky and drops them like sacks of potatoes, killing a fair number of them in the process, including Curious.

Toga isn’t the only character who receives an upgrade during this latest episode, as we witness Shigarkai disturbingly decay a large number of MLA members, with Spinner noticing that some of the decay seemed to spread without the heir of All For One even making contact. It would seem that this villain war is taking its toll on the League but also bolstering their Quirks to insane degrees in the process.

What do you think of Toga’s wild new abilities? Feel free to let us know in the comments or hit me up directly on Twitter @EVComedy to talk all things comics, anime, and the world of UA Academy.