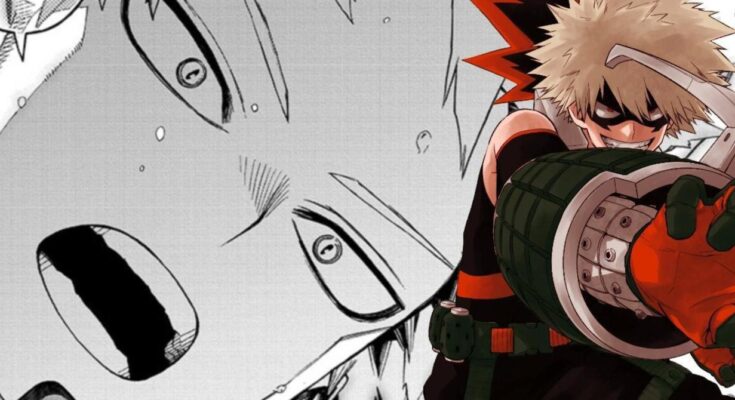 Warning! Massive spoilers for My Hero Academia to follow! The voice behind Katsuki Bakugo in the original Japanese language dub of My Hero Academia‘s anime had a major reaction to a huge moment for the character in the newest chapter of Kohei Horikoshi’s original manga series! The manga is now in the midst of its Final Act, and it got off to quite an intense start with the latest string of chapters of the series as Izuku Midoriya has been isolating himself now that he knows for sure that he’s become All For One’s prime target.

The newest chapter of the series took this even further when Izuku started to really feel the weight of the massive burden on his shoulders, and he’s trying to push himself through his exhaustion and trauma as he believes doing so will keep everyone safe. But the end of the newest chapter brought help in a surprising savior, Katsuki Bakugo, and Nobuhiko Okamoto had some major praise for this save.

As Okamoto revealed on a post on his official blog (as translated by @shibuyasmash on Twitter), he was a huge fan of this Bakugo moment, “I read Shonen Jump! This is so exciting…!” Okamoto began, but also had to be wary of spoilers for fans who might be following for his work in the anime, “I can’t say what though…! At any rate it’s just like, ‘that punk’! He’s a genius… Horikoshi-sensei is a genius…!” So Okamoto loved this big save just like fans did!

The newest chapter of the series teased that Izuku might not have to be fighting on his own anymore after Bakugo saved him from a deadly mercenary (the puppeteer villain, Dictator), and this is what’s going to ultimately save Izuku in more than just the obvious ways. This whole time he’s been feeling like he’s had to take this all on alone due to him being the final bearer of One For All’s power (and being the one All For One is really after), but as All Might and the others have tried to tell him, that’s not really the case.

Maybe it’ll take Bakugo to shake him out of it, but we’ll see with the next chapter of the series. It’s going to be an extra bit of waiting before we finally get to see it in action as both the next chapter of the manga and next episode of the anime will be taking a break this week, but we’ll see soon enough. But what did you think of Bakugo’s big save? Let us know all of your thoughts about it in the comments! You can even reach out to me directly about all things animated and other cool stuff @Valdezology on Twitter!