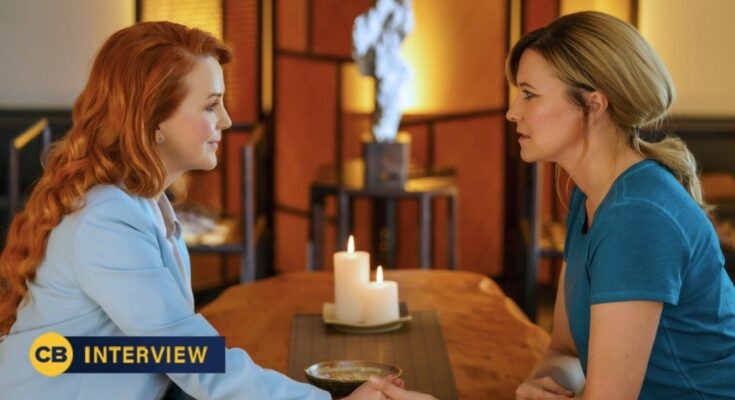 Ever since her breakout role in Xena: Warrior Princess, actor Lucy Lawless has taken one unpredictable role after the next, allowing her to tackle horror, comedy, drama, and fantasy. Her latest small-screen project is My Life Is Murder, which allows her to deliver one of her more grounded characters, but as the title implies, things aren’t always easy for Lawless’ Alexa, who is tasked with investigating an all-new and unsettling crime. This isn’t an entirely dour affair, however, with Lawless recently noting just how much she loves playing the character and how closely it mirrors her own self. Season 2 of My Life Is Murder premieres on Monday, August 30th on Acorn TV.

In Season 2, “Alexa finds herself back in her home country of New Zealand for the first time in years and can’t help herself when she is asked to look into a bizarre unsolved murder. Joined again by her partner-in-crime-solving, Madison Feliciano (Ebony Vagulans), as well as series newcomers including the charismatic detective Harry (Rawiri Jobe) and café owner Reuben (Joe Naufahu), she quickly finds herself investigating other murder mysteries in surprising, glamorous worlds filled with intriguing characters who are hiding dangerous and deadly secrets.”

ComicBook.com recently caught up with Lawless to talk the series, future projects, and the likelihood of a Xena revival.

ComicBook.com: Especially in recent years, there’s been such a resurgence of true-crime documentaries and murder mysteries, in general, are such a beloved genre of storytelling. For you personally, are you an amateur sleuth? Whether it’s the true-crime story or just when you’re watching a movie or a TV show, are you always trying to get to the bottom of the mystery before the show tells you or do you let it unfold?

Lucy Lawless: Do you know what? Some of them. Because I’ve watched all the English ones, Miss Marple. Sometimes I always go, “Oh, I’m not smart enough to put that all together.” And then I watch it three times and then go, “No, all the pieces are there,” but I didn’t care because I’m just hanging out with these people and it’s so beautiful, Brit ones, where they … Columbo, for example, the most genius of all. No, I just liked the hangout.

I like that it’s the closest character to me that I’ve ever played. I liked that I’m playing in my own accent, just for once, and, not that I ever wanted to before, but at this time in my life, I want to explore that. Just doing less or, in some cases, daring to show yourself a little bit is quite fun. That’s what I like about it.

Along those lines, 20 years or so ago, Peter Jackson and The Lord of the Rings helped put New Zealand on the map for more American audiences. For you, what does it mean to get to shoot Season 2, to get to showcase this different side of the country? It’s not all just sheep and fantastical worlds. What did that mean for you?

I love it. And even New Zealanders aren’t used to seeing themselves like that. This is a really … it’s an urban show with the city as a character. And she’s beautiful, sparkling. I’m so excited to show my hometown in this way, even to New Zealanders, as they are not used to seeing themselves this way. This is in a high rise and … We’ve got that whole bloody “Shire” thing in our own minds, right? But that’s not the reality for many people in their lives. The real filming reality of that is trying to frame out the road cones in my town, it’s a bloody nightmare. It was, I must say, not the easiest city in the world to shoot in, even without COVID, but she comes up looking beautiful.

With Season 2, obviously not all TV series are guaranteed to continue past the first season, so when you found out that you got to come back for a second season, what was one of your biggest goals of what you really wanted to accomplish in this follow-up season both with your character and just the show in general?

You’re a bit nervous because, can you deliver the same? Can you fulfill the fans’ expectations? You’re moving countries, you’re moving production houses. You’re moving a lot of different writers, entirely new cast, apart from my most excellent co-star Ebony Vagulans. And that was really nerve-wracking for me. But we did it. I’m really happy to say we did it, even though it’s not the same city, it’s just as appealing. And we bang out, we saturate it with color, ’cause that’s part of the armchair tourism, that you know you’re going to go somewhere that’s gorgeous and make you feel good for a minute because people don’t feel good at the moment. The world is scary out there, so it’s like, “Come into my parlor.” It’s like pulling back, opening the door into some secret, giant garden and you are welcome there. Everything works out nice at the end of the hour, you’re going to feel good, and I think people are really missing that right now.

I feel like everyone from New Zealand who I’ve ever talked to, every TV show, every movie, there’s always this unique sense of humor that other parts of the world just fail to capture. Since you’ve been involved in so many different projects of so many different genres, when you read a script for a new character that is representing New Zealand, do you notice those things in a script, of like, “Oh, this is someone who’s who really understands that part of the world versus playing an American character,”?

I wouldn’t even articulate it because it’s just, it’s implicit, do you know what I mean? You understand that they are because the lexicon is a little different and the irony and the quirkiness is something that we celebrate. Whether it’s there any more than it is — yeah, no, it is more than in America. There’s a little bit of quirk to everything. And I think now we’re just getting more comfortable and I think the differences that you guys are more apt to want to see that, like, your ear is attuned now. When I came in the ’90s, nobody could understand me, and now you’re actively seeking out, not just Australia, but even Kiwi stuff. Wellington Paranormal, how nutty is that? Or What We Do in the Shadows, all these things are that is quintessential Kiwi humor from those leading exponents of our modern Kiwi culture.

With Season 2, you get to reunite with co-stars that you’ve worked with before on other projects and I’m sure you’re thrilled to see them when they show up on set. Do you revert to the dynamic you used to have on set as far as characters go, that you have to overcome that familiarity? Or is there an underlying, unspoken bond and you’re on the same page immediately, and then you can go in these new directions?

The latter is the case, but also there’s a little bit of relief. You just suddenly, at 53, you come to an age where looking back is really pleasurable and really, re-meeting an old friend is so much richer than it was even in the past. And you’re grateful and, yes, it’s a very darling thing, whether that’s Renee [O’Connor] or Martin Henderson or Will Shatner, or people that you’ve known in the past. It just fills you with love. It fills you with this sense of wholeness and connection. And it’s a big relief when you’re a bit burned out on making a TV show to have that experience on set.

Since we live in this world of reboots, re-imaginings, and revivals, whether you were involved or not, in 2021, can you see something like a Xena reboot existing? Because I feel like it would be like a Game of Thrones, a million dollars an episode, a gritty, intense interpretation. Do you think the restraint of the original series made it special?

I can’t even believe you put those words together. That’s freaking cool. The “restraint of the original series,” we were very restrained. It was quite … it was like masterpiece theater. I see it [happening] more this month than I did three years ago, because I think there was a new crop of people who aren’t bound by the past. It might be helpful to … I’m going to leave that thought alone because somebody else, somebody pitched me the idea the other day that’s really smart. So there are new people coming up who are going to be able to reimagine it for a new generation. It will be utterly different, but it will be cool. And yes, I do. I do foresee that that person is coming.

That’s very cool, very exciting to hear. Since you have so many fans that are — every time a new project in a big property, a Star Wars or a Marvel or whatever comes up, they want you in it. And especially with —

But when you’ve got Taika Waititi, he’s doing a Thor, he’s doing a Star Wars, is there a blockbuster franchise you’d want to join or do you think it is just, where you are in your career, you prefer these more intimate stories like you’re telling with your TV series?

Of course, you always want to do a blockbuster. That’s bloody fun and everything. I must say, I’m really over action. That was never my gig and I just muscled through it, but hated all that. What do I prefer? I think apart from My Life As Murder, I have interests behind the camera and I see myself … That’s where I see myself going. I don’t need to be seen ever again.

Oh wait, I forgot. I am in a blockbuster, I’m part of Minions this year. Which is coming out, actually, they pushed it to next year. But I’m part of that, part of The Spine Of Night, which is this crazy —

Right, which was really … I had to support that, I had to jump on board because it was so weird. I was like, these people are doing something different and I think that’s coming out in some format right now. I can’t remember what. It will come out soon. But yeah, those are my two blockbusters, but I’m in Minions and it’s super, I’m super excited about that.

We’ll let all the blockbusters know, she’ll do a voice from the comfort of her own home, but maybe the blue-screen action-packed stuff, we can leave to someone else.

Yeah, that’s right. We’ll give that to the kids.

Season 2 of My Life Is Murder premieres on Monday, August 30th on Acorn TV.

This interview has been edited for length and clarity. You can contact Patrick Cavanaugh directly on Twitter.