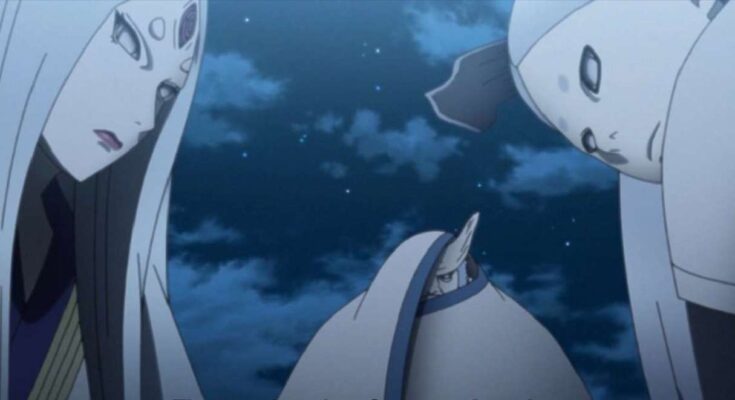 Boruto: Naruto Next Generations is currently telling the hard-hitting story of the Kara Organization Civil War, with Kashin Koji attempting to eliminate the leader of the group, Jigen, but the latest episode also gave us a look into the background of the head of Kara along with the story of the celestial ninjas known as the Otsutsuki. With the alien ninjas attempting to suck the earth dry of its chakra, it seems that the origin story of Isshiki ties into that of Kaguya, the villain who was pulling the strings of Madara Uchiha, Obito, and the Akatsuki.

With the Hidden Leaf Village offering sanctuary to Amado, the head of research and development for Kara who was responsible for a number of the biological modifications that have made many of the nefarious ninjas nearly invincible. While seated in front of Naruto, Sasuke, Boruto, and several of the other top-ranking members of the Hidden Leaf, Amado explains how Isshiki and Kaguya were sent to earth as tag-team partners, attempting to drain the world of its chakra in order to make the Otsutsuki immortal. Unfortunately, something happened that made the pair of celestial ninjas break their bond and set themselves apart.

As Amado explains, Kaguya had attacked Isshiki for reasons that have been lost to time, though the head of R&D for Kara theorizes that it might have been because the female ninja wanted the diving fruit all for herself. Though Isshiki had escaped with his life, he had suffered insane injuries as a result of this Otsutsuki battle and was forced to take over the body of Jigen, who was once a human monk, using the power of Karma.

The energy of Karma allows a member of the Otsutsuki to overtake a human body, saving them from death, but also restricting their insane power levels. As powerful as Isshiki is, he is still hamstrung by the body he currently inhabits, which will come into play as he continues to fight against the mysterious Kashin Koji. With Koji’s identity set to be revealed soon in this villain battle, it seems as if the latest arc is revealing a fairly large number of revelations about the ninja world and the celestial ninjas that threaten it.

What do you think of the betrayal that took place between Kaguya and Isshiki? Feel free to let us know in the comments or hit me up directly on Twitter @EVComedy to talk all things comics, anime, and the world of Konoha.