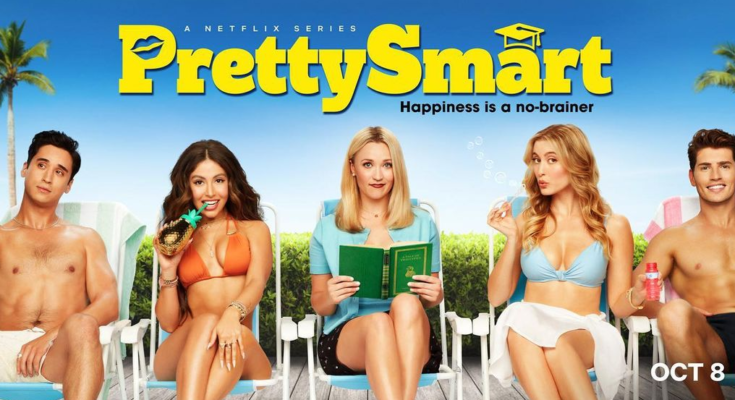 Pretty Smart trailer is out now

Netflix revealed the trailer of “Pretty Smart” on 13th of September. The show is about intellectual, brilliant, Harvard educated, Chelsea who got unexpectedly dumped by her boyfriend and had to move with her not so intellectual sister Claire. Additionally she also has to share home with some of her sister’s friends.

What is in the trailer?

The trailer starts with Claire waiting for Chelsea to reach home. As Chelsea moves in to her sister’s home she meets Claire’s three friends who are obviously not so intellectual. One of them is Grant, who seems to be a personal trainer. At first Chelsea feels like an outsider. But soon after she gets to know those people, Chelsea forms an friendly bond with them.

In the trailer there are scenes which shows some chemistry between Grant and Chelsea. Seems like we are going to witness some moment between them.

Who will be portraying the characters?

“Pretty Smart” is going to feature Emily Osment as Chelsea. The actress is very well known, especially to the Disney fans foe her role of Lilly Truscott in Hannah Montana. Olivia Macklin will be playing the role of Claire.

Grant’s character will be portrayed by Gregg Sulkin. Michael Hsu Rosen and Cinthya Carmona will play Jayden and Solana, the other two roommates of Claire.

This ten episode series is from the makers Jack Dolgen and Dough Mand. Jack Dolgen is well known as he wrote for “Crazy Ex Girlfriend” while Dough Mand worked as a writer for the popular show “How I met your mother”.

As “Pretty Smart” is coming out on 8th of October fans don’t have to wait much long. Till then take a look at the trailer.