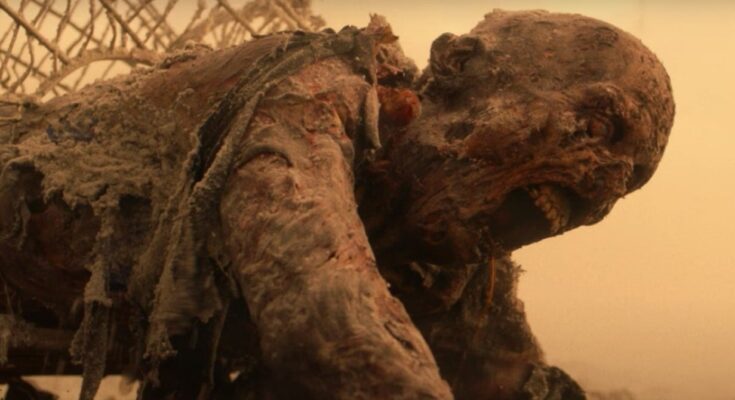 “Nightmarish” nuclear zombies that are “weird and scary” are putting the fear back in Fear the Walking Dead. An explosive end to Season 6 turned Fear into ground zero of the nuclear zombie apocalypse when ten warheads fired from a submarine-launched missile detonated over Texas, bombarding the state with lethal levels of radiation that will bring new dangers in Season 7. The fallout from this second apocalypse brings different kinds of threats — environmental, living, and undead — like the nuked wasteland walkers brought to life by The Walking Dead special effects make-up artist Greg Nicotero and KNB EFX Group.

“We have to give huge credit to Greg Nicotero and his team at KNB for always upping the ante and just coming up with incredibly novel, inventive, horrifying ways to redefine these walkers season to season,” Fear co-showrunner Ian Goldberg said during a post-Season 6 live stream with TWDUniverse on Twitch. “There’s a lot more of that to come in Season 7. There’s some [walkers] that are so weird and scary and nightmarish in ways that feel really fresh and different, which is really amazing this deep into the universe.”

Goldberg revealed the first look at these nuclear walkers during the stream with TWDUniverse, showing off a scorched walker’s body that “has been fused and melted to a shopping cart from the force of the blast of the nuclear bomb. You see how charred his skin is.”

“This is just a preview of how horrific and scary these walkers can be, and the effects that something like a nuclear warhead detonating can have,” Goldberg said. “We wanted to show this as a preview for how much the world [of Fear] is gonna change in every way.”

Goldberg and his fellow showrunner Andrew Chambliss revealed on Talking Dead that the survivors of the blasts are going to reckon with a “completely new reality” in Season 7. “This new world is going to bring out very different sides to all of these characters because they are in a whole new reality — and a very scary one,” Goldberg said.

“One thing that I’m particularly excited for [in Season 7] is Ian and I had a meeting with Greg Nicotero and his team. We said, ‘All these nuclear bombs went off, let’s push the walker stuff as much as we can,'” added Chambliss on Talking Dead. “And they gave us some really cool designs that we’re excited to see brought to life.”

Season 7 of Fear the Walking Dead premieres later this year on AMC. Follow the author @CameronBonomolo on Twitter for all things The Walking Dead Universe.