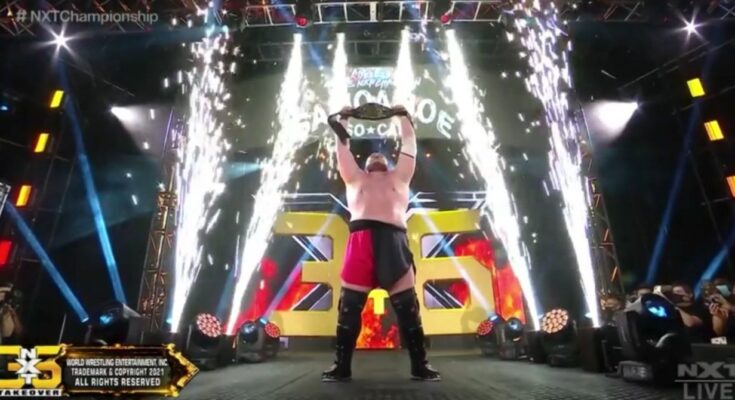 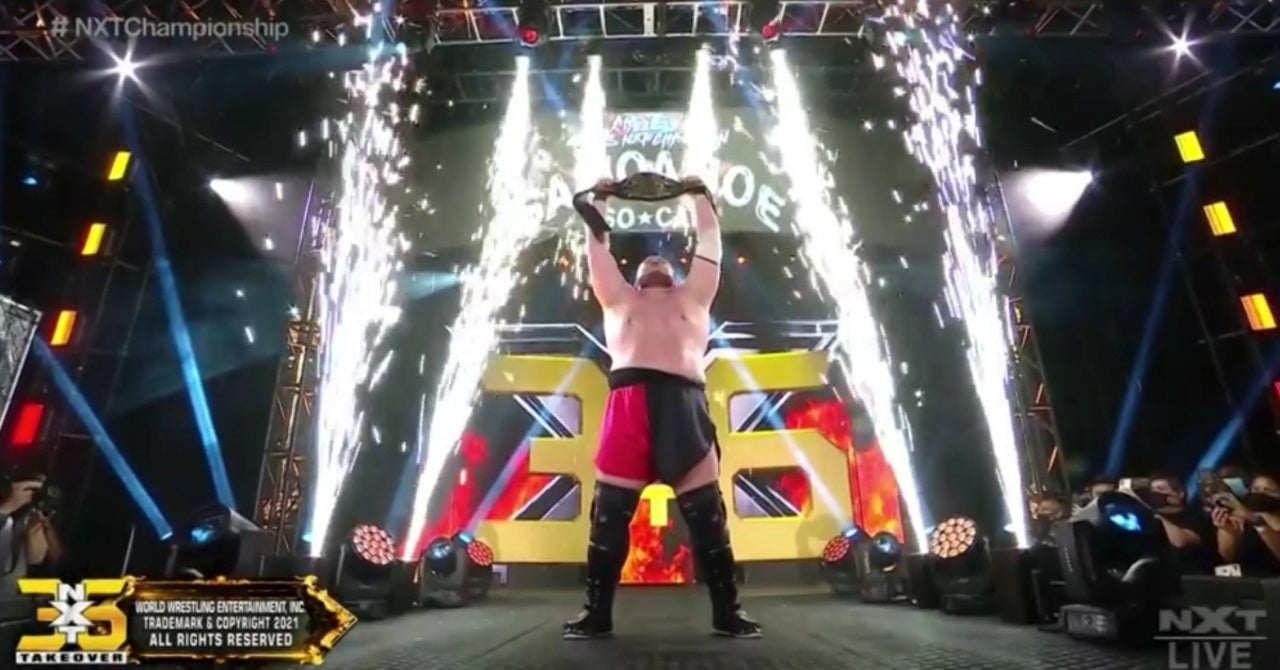 Karrion Kross has ruled NXT since he became Champion, but the appearance of Samoa Joe disrupted that reign and brought in someone who was just as deadly and imposing as the Champion. After weeks of trying to one-up each other and take each other down, tonight’s main event finally provided the place to decide just who would be NXT Champion. They circled each other for a bit and then Joe delivered two massive chops to Kross. Kross would get Joe into the corner, but Joe would evade him and then deliver another chop, followed by a big chop to the back, and a kick to the chest.

Kross bounced off the ropes for momentum but Joe captured him in a Clutch, but Kross did manage to get out and send Joe to the floor outside of the ring. He hit Joe with a big forearm to the back and then slammed Joe into the barricades. Kross rolled Joe back into the ring and looked pretty confident, stomping on Joe’s hand and kicking him followed by more forearms and punches.

Joe got in two more chops and then a headbutt, but Kross responded with a kick to the face and then a Doomsday Saito, but. the ensuing pin Joe kicked out of. Then Kross locked in an Ankle Lock, but Joe managed to get Kross to the floor outside of the ring. Joe rolled Kross in, but Kross got Joe in the corner. Kross then delivered more elbows and clotheslines and then a slam to the mat, but Joe still kicked out of the pin.

Joe managed to catch Kross and deliver a Power Slam, but Kross kicked out of the pin. Joe Power Bombed Kross but Kross lifted his shoulder, so Joe then locked in a submission hold on Kross, transitioning into several submissions in the center of the ring. Kross got to the rope to break it, but Joe did some damage. Kross evaded a charging Joe and kicked him in the face, and then hit a big knee to Joe’s face, but Joe kicked out of the cover.

More forearms from Kross to the back of Joe’s head and then a stomp on Joe’s hand, followed by a DDT, but Joe kicked out again. Kross kept punching Joe and then went to bounce off the ropes, but Joe broke it up and then suplexed Kross. Joe kept evading Kross’ punches and then hit a big boot and a Senton but Kross kicked out of the pin. Then another Senton right on Kross’ back followed, which Joe followed up with a Coquina Clutch. Kross tried to get to the ropes, but Joe pulled him back to the ground and kept it locked in.

Kross rolled out and locked in an arm breaker, but Joe kept fighting. Kross went for the Cross Jacket, but he wouldn’t fade, shoving Kross into the turnbuckle. Kross responded with a forearm and then prepped to finish it off, but Joe caught him an Uranage. Kross caught Joe with a boot but Joe responded with a massive kick to the head, and then he picked up Kross and hit a Muscle Buster, and that was al she wrote for Kross, as Joe got the 3-count and the win, becoming the new NXT Champion.

Are you happy Samoa Joe is the new NXT Champion? Let us know in the comments or as always you can talk all things NXT with me on Twitter @MattAguilarCB!