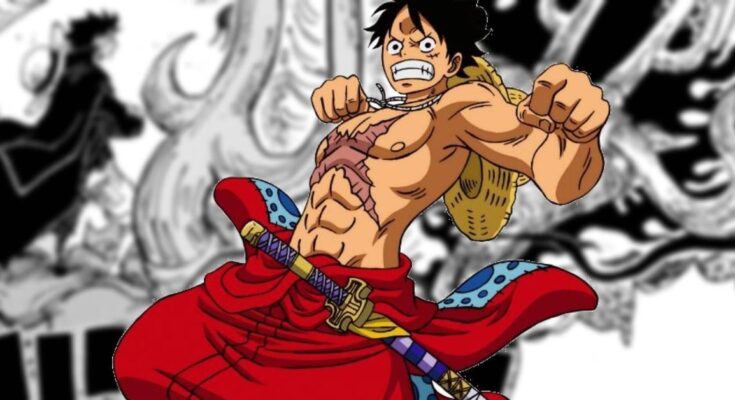 One Piece has finally kicked off Round 3 of Luffy and Kaido’s big fights in Wano with the cliffhanger in the newest chapter from Eiichiro Oda’s original manga series! It’s been a long and tough journey for Luffy over the course of the Wano Country arc as he has taken on Kaido a couple of times already. The first time he truly realized how wide the gap was between him and one of the Four Emperors of the sea, and the second was even worse as he and the Worst Generation had to take on two Emperors at the same time.

Luffy had managed to have two major chances at taking Kaido over the Wano Country arc so far and has lost in a devastating fashion both times. Though he has taken some losses, each time he only gets stronger and has even more desire to take him down in a rematch. He had been trying to get back to the Skull Dome in the last few chapters after plunging into the sea in his last loss to Kaido, and with Momo’s help, Luffy and Kaido have now kicked off the third round of their fights with the newest chapter.

Previous chapters have seen Luffy trying to urge Momo to help him fly to the top of the Skull Dome, and Momo was able to do this at last thanks to aging himself up 20 years with Shinobu’s help. Now in his fully adult dragon form, Momo was able to start flying Luffy back up to the Skull Dome’s roof. Unfortunately, Momo was still very afraid of heights and thus took a bit to get to the roof and tore through much of Kaido’s castle on the way up.

The final moments of the chapter sees Luffy kicking off this next round strong with a Snakeman Jet Culverin (together with Yamato’s own attack), and although Kaido recovers the first thing he wonders is how Luffy managed to survive and the identity of this new giant dragon. Luffy once again declares he will be the King of the Pirates, and Momo declares that he is the man who will be the Shogun of Wano. Now that this new round has kicked off, it’s the best looking one yet.

This could very well be the final fight between Luffy and Kaido, and the odds are great as Kaido’s been worn down through the Onigashima fights so far. But Luffy has also taken surprising losses after looking strong initially, so this could go anyone’s way. What do you think? Are you ready for Luffy and Kaido’s next major fight? Let us know all of your thoughts about it in the comments! You can even reach out to me directly about all things animated and other cool stuff @Valdezology on Twitter!