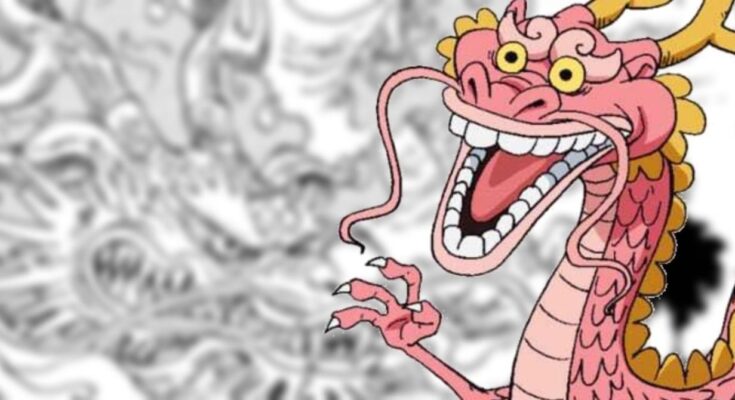 One Piece introduced Momonosuke Kozuki’s full Dragon form with the newest chapter of the series! While the Wano Country arc has been particularly important for Luffy’s potential Pirate King future and the future of the series as a whole, one of the most important threads running throughout the arc has been how Momonosuke has steadily grown throughout his struggles since first asking for Luffy’s help several arcs ago. Ever since this final battle started taking shape, Momonosuke has been thrust further into his role as the heir for not only the Kozuki Clan, but the hopes of Wano’s people.

Taking this all on his shoulder, Momonosuke then decided to go for broke with a major gamble at the end of the previous chapter. Asking Shinobu to use her Ripe-Ripe Fruit abilities to age up his body, he wanted to quickly become the adult that Luffy not only wants to rely on, but needs to rely on in order to get a third round with Kaido. The newest chapter provides just that with a full unleashing of Momonosuke’s true dragon form.

Chapter 1023 of the series picks up after Momonosuke asks Shinobu for her help, and while she reveals that his body will mature but his mind will stay the same, it seems Momonosuke has completely accepted this risk and the fact that he has now aged forward the 20 years that he had previously skipped over. Shinobu confirms that he’s now 28 years old, and cries at the fact that he looks just like his father, Oden, who they had lost years ago.

But before we get to see his new adult self, Momonosuke transforms into his now complete dragon form that the others instantly mistake for Kaido instead. Luffy sees him and immediately knows that it’s Momonosuke, however, and after a brief flashback to their first meeting, he’s now ready for the complete version of the Kozuki heir to fly him back up to Onigashima for the third, and hopefully final round against Kaido.

With this fuller transformation, Momonosuke’s journey is essentially complete. All that needs to happen now is for Luffy to win and Momonosuke to take back Wano. But that’s all easier said than done. What do you think of Momonosuke’s full Dragon form? Let us know all of your thoughts about it in the comments! You can even reach out to me directly about all things animated and other cool stuff @Valdezology on Twitter!