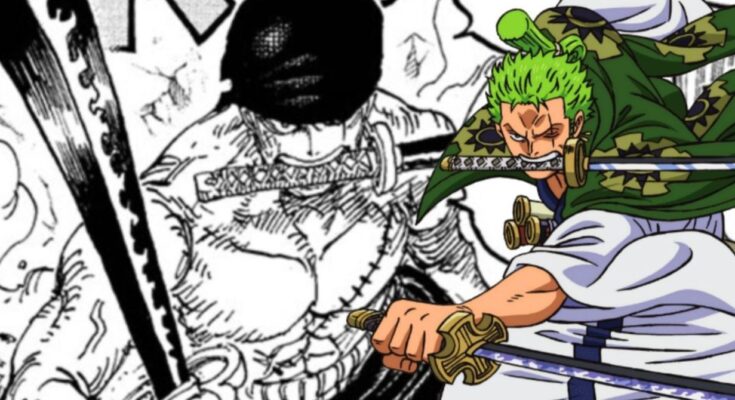 One Piece is setting the stage for Roronoa Zoro’s epic lineage with a curious tease in the newest chapter of Eiichiro Oda’s original manga series! The Wano Country arc has been a pretty huge one for Zoro overall because not only have fans not seen him in action for quite some time, but he was the perfect fit for this samurai influenced land. But as he continues to fight in the climax of the War at Onigashima, it seems that he might be a much more perfect fit in the land of Wano than fans might have ever been aware of.

The previous chapter kicked off Zoro and Sanji’s final fight of the Onigashima climax as Zoro starting fighting King, and the newest chapter of the series dropped some curious teases about Zoro’s true lineage when the Akazaya Nine recalled why he seemed so familiar to them. Because when he was given Oden’s former sword, Enma, before the war began, they couldn’t argue against it because he reminds them so much of a descendant of Ryuma, the God of the Blade.

Chapter 1023 of the series kicks off the fight against Zoro and King in full, and while watching the fight from afar Kawamatsu begins to tell Hyogoro how he felt when Hiyori first passed on Enma to Zoro. He reveals that he couldn’t bring himself to stop her, and Hyogoro agrees because although Zoro is not from Wano he’s apparently the spitting image on Shimotsuki Ushimaru, the Daimyo of Ringo. They even mention that their sword styles are the same.

Ushimaru was a descendant of Rumya Shimotsuki, and after returning Ryuma’s blade to Wano, it feels like a fated event (that got started long ago when Zoro fought Ryuma’s body before). Making matters even more significant was that Ryuma was a one-eyed samurai as well. Since we know very little of Zoro’s origin, this could be a huge indication that he’s meant for even greater things than his current Supernova status would suggest.

If Luffy is indeed destined to become King of the Pirates, it would be a fitting upgrade for Zoro as well to find out he’s part of a famous swordsman lineage. But what do you think? Curious to think what it means for Zoro’s future? Let us know all of your thoughts about it in the comments! You can even reach out to me directly about all things animated and other cool stuff @Valdezology on Twitter!