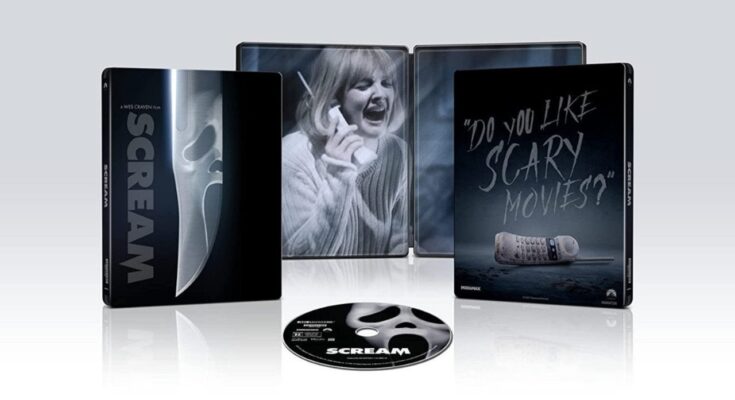 There’s a lot to be excited for if you’re a Scream fan, because not only do you have an all-new film to look forward to in January of 2022, but the original film will also be coming to 4K Ultra HD Blu-ray in October, just in time to add it to your collection before Halloween. In addition to the film earning a 4K Ultra HD release, it is also earning a SteelBook release, adding even more excitement for collectors who are planning to add the film to their library of titles. The new 4K Ultra HD release of Scream is expected to hit shelves on October 19th. The SteelBook anniversary edition is available to pre-order here on Amazon for $24.80. The standard version is available here on Amazon for $29.99.

The original film focuses on a series of grisly murders unfolding in a small suburban town, with a costumed “Ghostface” killer initially appearing to strike at random. As more bodies pile up, the motivation behind the murders becomes clear, with the teen-aged residents of the town attempting to use their expansive knowledge of horror films to prevent more murders from taking place.

The film was directed by Wes Craven, who already established himself as a horror legend thanks to films like A Nightmare on Elm Street and The People Under the Stairs, though it was his partnership with writer Kevin Williamson that helped introduce his filmmaking sensibilities to an entirely new generation. The film would go on to earn three sequels from Craven, as well as a TV series that reimagined the core concept into a long-form narrative.

With Craven being such an integral component in the series’ success, his passing in 2015 made most audiences assume his legacy could never be continued. Star of the first four films and the upcoming entry Neve Campbell previously detailed how new filmmakers Matt Bettinelli-Olpin and Tyler Gillett persuaded her to return to the franchise.

She added, “That meant a lot. That letter meant a lot to me. Then I went and watched one of their films and it’s brilliant and in keeping in tone. So I thought, ‘You know what, I can do this.’ I think this could be a lot of fun and a good idea. These are people who are doing it for the love of these films. So that meant something.”

Will you be adding the film to your collection? Let us know in the comments below or contact Patrick Cavanaugh directly on Twitter to talk all things horror and Star Wars!