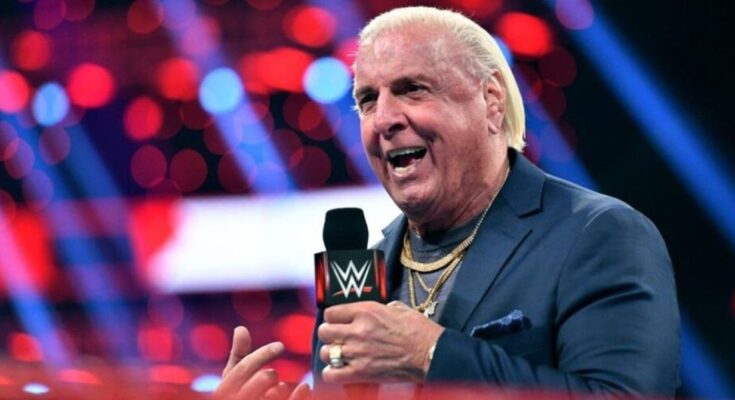 Tonight’s big clash for the AAA Mega Championship at TripleMania XXIX was one of the biggest matches of the night, and it felt that way right from the very first entrance. The match between Mega Champion Kenny Omega and his newest challenger Andrade el Idolo was certain to be a great one, but even better was the fact that before the match even started we got a surprise appearance from a wrestling legend. Accompanying Andrade to the ring was none other than the Nature Boy himself Ric Flair, and you can see the entrance in the photo below.

You can’t get much better than having an icon like Flair walk with you to the ring, and both were all smiles during the big event. For those unfamiliar with the connection, Andrade is currently engaged to WWE superstar Charlotte Flair, who is also Ric Flair’s daughter. We’re not sure if Charlotte was able to make the trip as well, but it’s awesome that they came out to support him.

Andrade is looking to make this a back-to-back losing streak for Omega, who just lost his Impact World Championship to Christian Cage on AEW Rampage. If he loses the AAA Mega Championship, that will remove two titles from the belt collector in just 48 hours, and he probably won’t be taking that very well come next week’s Dynamite.

This would be a huge win for Andrade, who came into AEW with a lot of potential and promise, and we can’t wait to see what happens when the dust settles.

What did you think of the match? Let us know in the comments and as always you can talk all things wrestling with me on Twitter @MattAguilarCB!