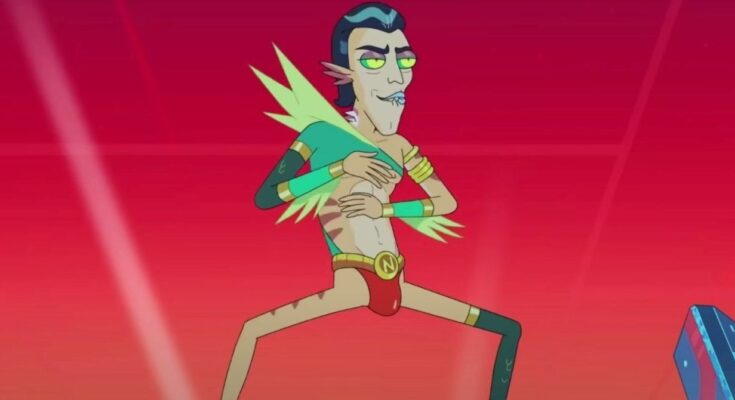 Rick and Morty co-creator Justin Roiland explained how it took until Season 5 of the Adult Swim animated series to finally introduce Rick’s nemesis, Mr. Nimbus. The much anticipated fifth season of the series is now well underway, and fans saw how the series got off to a surprising start with the premiere introducing Rick’s nemesis to the series, the Marvel’s Namor-like Mr. Nimbus, king of the seas. It was a ridiculous premise to start as seeing such a peculiar character getting under Rick’s skin so badly, and that’s part of why they steered into it for the premiere.

Speaking to The Wrap about Mr. Nimbus’ debut in the Season 5 premiere, Rick and Morty co-creator Justin Roiland noted how he felt like this particular nemesis was just one in a long line of Rick’s enemies, “I imagine Rick has a quote-unquote nemesis character sort of sprinkled in every nook and cranny all across the galaxy, all across the cosmos, the multiverse,” Roiland began. “To me, this is just another one. Like, it’s his “nemesis,” he calls him his nemesis, but this guy is just another in a long list of people that Rick has created a bunch of beef with.

The humor came from highlighting it as a big official thing considering Nimbus’ ridiculous nature, “And that was what was kind of funny about it and that’s why we leaned into highlighting this character as his, quote-unquote, nemesis, like calling him like that and making it an official big thing because of how ridiculous this character is,” Roiland explained, “Anyone watching would know that this guy’s not really much of a challenge for Rick.” But the trouble with the episode came with crafting a suitable challenge for Rick in the first place.

“But with a character like Rick, who is just so invincible, it’s hard to write for a character like that where you have the audience going, ‘Oh, Rick can do anything.’” Roiland stated. “You’ve seen him basically get out of just about anything and he’s usually eight chess moves ahead of any opponent that he’s dealing with. And it’s hard to kind of pull that back and go, OK, well, let’s do an episode where that isn’t quite the case. He’s kind of got to play by the rules and not do any crazy s–t.”

Ultimately, the premiere ended up being mostly about Morty as Roiland points out, “But to me, the episode is less about Rick and Nimbus, although that is important, it’s more the Morty side of the story, is what I really love about that episode.” But what did you think of Mr. Nimbus’ debut in Rick and Morty’s Season 5 premiere? Would you want to see his nemesis again? Let us know all of your thoughts about it in the comments! You can even reach out to me directly about all things animated and other cool stuff @Valdezology on Twitter!