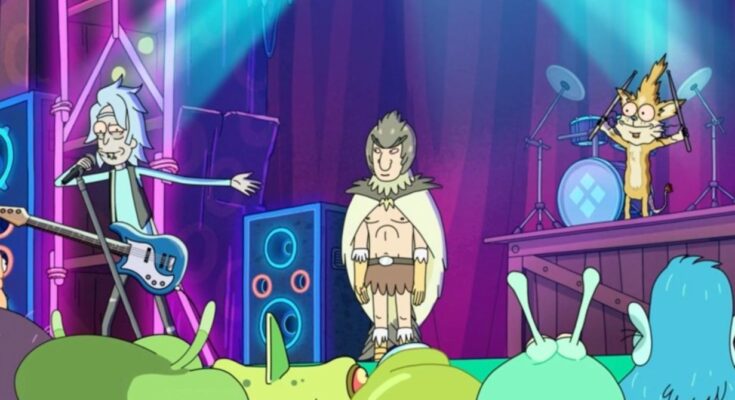 Rick and Morty revealed how Rick and Birdperson first met with the the newest episode of Season 5! The fifth season of the Adult Swim animated series has been fairly light on canonical content tying it back into the previous four seasons thus far, but that changed big time with Episode 8, “Rickturnal Friendshine of the Spotless Mort.” Here Rick decided to finally follow up on the Season 4 finale and tries to repair Birdperson’s body after breaking Phoenixperson apart and storing him in his garage. Through this we got a lengthy look into their long friendship.

This, of course, included a look into how the two of them first met. While fans finally got to see them fighting as part of the resistance against the Galactic Federation, and filled in more gaps about Rick’s past, the first meeting between the two was far less intense than anyone could have expected as they first met one another at a Burning Man like music festival where Rick had offered Birdperson some drugs.

With Rick diving into Birdperson’s memories in order to retrieve his best friend’s conscious mind from his subconscious, he comes across the younger version of himself and Birdperson at this festival. The two of them bond over Rick dispensing his highly illegal hallucinogen, and it’s revealed in the episode later that the two of them eventually formed a band together with Squanchy at the same festival after doing more of these drugs.

This first meeting kicked off a look into their time together as it not only revealed how Rick and Birdperson grew closer in their fights against the Federation, but also how Rick grew more emotionally connected to Birdperson than was reciprocated at first. This complication definitely left a mark on Rick going forward, and we see how that impacts his future interactions with his best friend once he finds the real one.

It’s revealed that Birdperson and Tammy had a child, and Rick had hesitated in telling his friend because it meant that although Rick brought him back to life and restored his mind, Birdperson would not be able to hang out with Rick as much because he had to go be a proper father. This could mark a major turning point for the series as now we have our best grasp of Rick yet, and makes the upcoming Season 5 finale all the more enticing when it premieres this Fall.

What did you think of Rick and Birdperson’s first meeting? How did you like Rick and Morty revealing their past together? Let us know all of your thoughts about it in the comments! You can even reach out to me directly about all things animated and other cool stuff @Valdezology on Twitter!