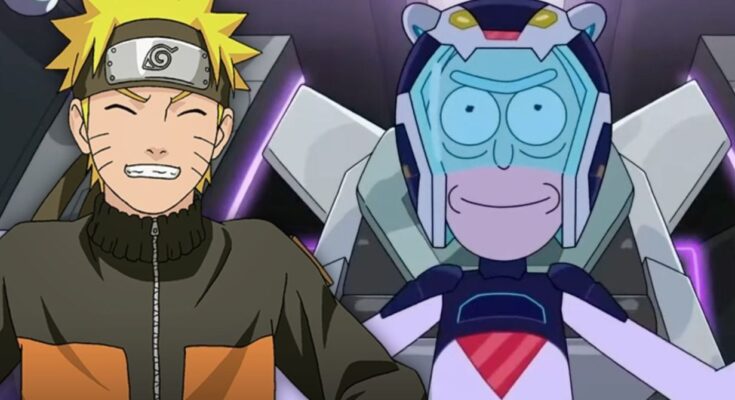 Rick and Morty dropped a hilarious Naruto Easter Egg with Season 5’s newest episode! As teased with the first look at the next episode of the series, Episode 7 of the fifth season was the first foray into anime for the Adult Swim animated series. While the franchise has experimented with full anime short films in the past, this episode was the first one to fully incorporate anime references. While the majority of these references were for Voltron, there was a fun Naruto Easter Egg where you’d least expect it. Major spoilers for Rick and Morty Season 5 Episode 7 below!

Episode 7 of the series, “Gotron Jerrysis Rickvangelion,” started out with Rick finding the missing piece of a robot needed to form Gotron, a Voltron like mecha made out of five colorful ferrets. Eventually the Gotron robot soon gets taken over by a team of disgruntled Gotron pilots Rick had taken the ferrets from, and Summer and the Smith Family save Rick with the help of their giant incest baby. The baby’s name? Naruto.

Back in the fourth episode of Season 5, “Rickdependence Spray,” (an episode even the writer for it has deemed “disgusting and tasteless”), Morty’s sperm monster fertilized an egg of Summer’s that the government had grown to monstrous size in order to lure the sperm towards it. This formed a “giant incest baby” that was then launched into space at the end of the episode. In Episode 7, this gag is not only revisited several times, but plays into the plot overall in a surprising way.

It’s revealed that the government actually attempted to turn the incest baby into a weapon, and had taken Summer to a secret base on Mars to see whether or not it would respond to his mother instinctively. She was supposed to discipline him to turn him into the government’s ultimate weapon, but ended up helping it escape. She then uses this baby to end up saving Rick from the Gotron pilots at the end of the episode, and reveals its name is Naruto. Even further making the joke that the giant incest baby destroying a robot is just typical for anime.

But what did you think of Rick and Morty bringing Naruto and other anime into the fifth season? How are you liking the fifth season overall so far? Let us know all of your thoughts about it in the comments! You can even reach out to me directly about all things animated and other cool stuff @Valdezology on Twitter!